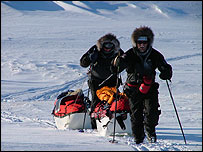 Okay, who is ready to go on a polar adventure? According to this story over at Wide World Mag, arctic explorer and environmentalist Jim McNeill is putting together a team of novice adventurers to make an expedition to the North Pole of Inaccessibility in January 2010, and he’s hoping that he’ll find 28 people willing to go on a leg of the journey.

The Pole of Inaccessibility is defined as the furthest point from land on the Arctic Ocean, and as of now, it has never been reached by man. It is one of the most desolate and inhospitable places on the planet, and as such, it holds an allure for an adventurer.

The plan is to recruit 28 people to join McNeill as he makes the 800 mile journey to the Pole. These recruits will be broken down into four teams of seven, and each of those teams will take part in a 200 mile leg across the ice. Along the way, they’ll take reading of the health of the ice and determine the effects of global climate change on north polar regions.

Anyone interested in joining the team should go to this website where they’ll find more information on the expedition. You can also read the initial press release from a few days back as well, which has some insights into what is expected. And when you’re ready to join the team, download this .PDF document which will answer most of the questions and tell you how to get involved.

Looks like another amazing adventure. Anyone want to sign up? We can go together and laugh at all those fools that are going to the Geographic North Pole. Pfft! Wimps! 😉