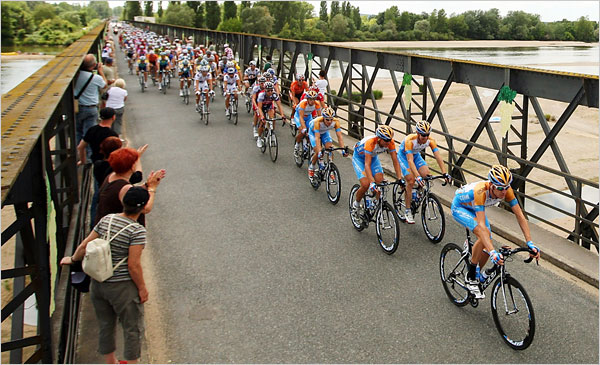 The past few days have been fairly low key and drama free in the Tour de France, with no major attacks on the Yellow Jersey, Italian rider Rinaldo Nocentini stays in the lead with Astana’s Alberto Contador and Lance Armstrong lurking just six and eight seconds back respectively.

In fact, about the only drama we have had since leaving the Pyrenees has surrounded the Green Jersey, which now sits squarely on the back of Mark Cavendish, who has already won four stages this year behind the strength of his Columbia-HTC team. Coming out of the mountains, Thor Hushovd led all the sprinters, but Cavendish has lived up to his moniker as “The Missile” ever since.

Today was a long, hot stage through the rolling hills between Tonnerre and Vittel. With a distance of 211.5km (131 miles), it was going to be a challenge for the riders who have now been on the road for nearly two weeks. The challenge was raised at the 70km (43 mile) mark, when a break away formed with seven riders leaving the Peloton behind and making a dash for the finish line. The break contained these riders: Laurent Lefevre (Bbox), Sylvain Calzati (Agritubel), Franco Pellizotti (Liquigas), Egoi Martinez (Euskaltel), Nicki Sorensen (Saxo), Remi Pauriol (Cofidis), and Markus Fothen (Milram).

With 20km to go, the break away enjoyed a four minute lead on the Peloton, when Sorensen and Calzati upped the temp, and put themselves out in front of the other five by about 10 seconds. They stayed at that gap until the 5km point, where the break’s lead increased to six minutes. Sorensen took the opportunity to attack, leaving Calzati in the dust, and opening up a sizable gap on the others, before cruising home with the stage win, some 47 seconds ahead of the next closest rider.

That was about the most exciting part of the day, as nothing else has changed with the other jerseys. Cavendish is in Green, Martinez holds on to the Polka Dot, and Martin is in White. But, tomorrow promises to bring the fireworks back, as they reenter the mountains once again with a 200km (124 mile) ride from Vittel to Colmar. The stage has several category 2 and 3 climbs, and even a cat 1. These climbs will bring some excitement back to the race, and are likely to cause Nocentini to drop the Yellow Jersey. If he is still in Yellow come Monday, the second and final rest day, expect him to be absolutely destroyed on Tuesday, when the big climbs arrive. Heading into the weekend, we’ll get a nice tease of what is to come, but next week is going to be a tough one all around.

On a final note, the Tour has done away with the gimmick they ran a few days back on Stage 10 in which no teams were allowed to use their radios. It was an attempt to add some excitement to an otherwise uninteresting stage, but it failed to do much of anything. A second day of radio blackouts were suppose to occur tomorrow in Stage 13, but they decided against it for a number of reasons.