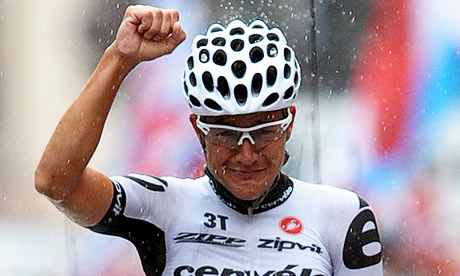 Friday’s stage of the Tour de France marked the return of the serious climbs as a prelude to the Alps that loom early next week, but the day got off to a gloomy start with the announcement that American rider Levi Leipheimer of Team Astana is out of the race following an accident yesterday that left him with a broken wrist. Levi was riding in fourth place in the General Classification before the accident, and his loss will play a major role in Astana’s strategy going forward. What this will do for the Alberto Contador and Lance Armstrong in the days ahead will be interesting, and Levi was clearly the strongest rider on the team after those two.

The departure of Leipheimer seemed to cast a cloud over the entire race, as the Peloton had to deal with rain and cool weather the entire day. The stage was a 200km (124 mile) affair that ran from Vittel to Colmar, with plenty of climbs, including the Category 1 Col du Platzerwasel, stretched out across the ride. The conditions made it tough for the top riders to make a move on any of those hills, and as a result, the top of the leaderboard remains unchanged with Italian Rinaldo Nocentini still in Yellow, with Alberto and Lance Chasing.

That doesn’t mean that there wasn’t anything exciting to see in today’s race. There was an early break attempt that the Peloton took care to contorl, not letting them get out to more than a one minute lead, but at the 60km (37 mile) point, three riders put in an attack with Heinrich Haussler of Team Cervélo, Sylvain Chavanel of Quick Step and Ruben Perez Moreno from Team Euskaltel-Euskadi making a move for the win.

The three went out as far as nine minutes ahead of the Peloton, which quickly ate up the other members of the break, and dueled it out over several climbs before hitting the downhill sprint to the finish. Perez was the first to crack and fell of the pace of Haussler and Chavanel, who topped out and raced toward the line along a tricky, technical descent. Haussler managed to drop Chavanel at that point and raced ahead to a very emotional stage win, tears in his eyes as he crossed the finish line.

For the most part, the Peloton was once again controlled by Astana with some help from Saxo Bank. The leaders rode strong, and Lance was in command at the front, with Alberto on his wheel on that final climb. The pace of the top riders was enough to drop Denis Menchov and Bradley Wiggins, who now sits in fourth place over all with the departure of Leipheimer.

While the General Classification remains the same, there were changes to the status of the other jerseys today. While Mark Cavendish is practically unbeatable in a sprint, he doesn’t do well in the climbs, and as a result, God of Thunder Thor Hushovd recaptured the Green Jersey. In the next few days he’ll be looking to accumulate as many points as he can in the mountains in an attempt to hold off “the Manx Missile” down the stretch run to Paris. Egoi Martinez dropped the Polka Dot Jersey today as well, as Franco Pellizotti earned plenty of climbing points. Who will go home with the title “King of the Mountains” will be decided in the Alps next week. Tony Martin held on to his White Jersey for another day, and will be pressed to defend it in the days ahead.

Tomorrow’s stage is much like today, running 199km (123 miles) in length from Colmar to Besançon. The climbs won’t be nearly as challenging, but the weather is expected to be very similar, which always makes for surprises and challenging rides.

Rumors have begun to circulate about dissension in the ranks of Astana, as the two co-leaders of the team, Contador and Armstrong, vie for the position to be the one the team throws it’s weight behind. It is clear that the two men don’t see eye to eye, and Contador’s surprise attack last week in the Pyrenees has created a rift between him and Armstrong. In my opinion this will play out in one of two ways. Team manager Johan Bruyneel will have to either step in and proclaim who the team will push to Paris or they’re going to have to let the two men sort it out between the two of them in the Alps. As a fan of the sport, I’d love to see the latter. Guess we’ll find out next week.