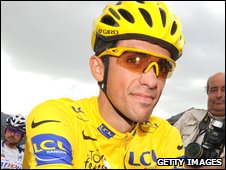 Today’s stage of the Tour de France was the final individual time trial for 2009, and it promised to once again shake up the standings, as the climbers who took center stage the past few days were pushed aside in favor of the riders who specialize in putting their head down and attacking the course in as fast of a time as possible.

Heading into the day, Alberto Contador stayed in the Yellow Jersey, but climbing brothers Andy and Frank Schleck had pulled themselves up into second and third place following a brilliant ride in the Alps yesterday. Their performance in the time trial was going to go a long way towards determining their ultimate finishing position on the Champs Elysees on Sunday.

The gauntlet was thrown down early Fabian Cancellara and Mikhail Igantiev, both of which went out fast and had their times stand up throughout the day as other riders set out from the starting house. The riders faced a rather straight forward course that was mostly flat, although there was one 3km climb, and non-technical, which was a far cry from the twisty and demanding course that they started the Tour on back in Monaco.

As is traditional in the final time trial, the riders start in the reverse order of their standings in the General Classification. That meant that the top contenders wouldn’t hit the road until later in the morning, when guys like Lance Armstrong, Brad Wiggins, and Andreas Kloden would ride out just in front of Contador and the Schlecks. Armstrong was looking to gain time on Andy and hopefully knock Frank out of the top three, and he had a good right that eventually achieved both of those goals.

The star of the day was Contador though, as he once again showed that he is the strongest rider in the field, dominating the time trial and even riding the course faster than Cancellara. At the end of the day, Contador pulled away from his closest rivals, and tightened his grip on the Yellow Jersey. He now stands 4’11” in front of Andy Schleck and 5’2″ ahead of Armstrong. Those are impossible gaps to close for any rider, barring any kind of unforeseen incident, and it now appears that Contador will coast into Paris in Yellow this Sunday.

The real battle now is for second and third place. Andy Schleck looks like he is in a good position to remain in the second spot, but third is wide open, with Lance Armstrong currently holding down that spot on the leaderboard, but Wiggins, Kloden, and Frank Schleck are all looming very close. With a final day of climbing on the horizon for Saturday, Armstrong is going to have a tough fight to stay on the podium.

Tomorrow, the Peloton returns to the road with a 178 km (110 mile) ride from Bourgoin-Jallieu to Aubenas. While the course has a few climbs, the largest being a Cat 2 late in the stage, it isn’t anything that should cause a shake-up on the leaderboard. There are even a couple of sprint sections for the points towards the Green Jersey, which looks to be heading to Paris with Thor Hushovd. Things will get really interesting on Saturday though, when the stage ends on a Beyond Category climb that will definitely have the contenders jousting once again.

So, the Tour really is beginning to wind down now. It ends Sunday of course, with the mostly ceremonial ride into Paris, where the Yellow Jersey winner looks to stay safe and sips champaign on the road. As mentioned, Hushovd now has a stranglehold on the Green Jersey and isn’t likely to give it up since he has a 30 point lead on Mark Cavendish. Italian rider Franco Pellizotti is way out in front in terms of the Polka Dot Jersey, and is in no danger of surrendering it either. And finally, the White Jersey seems to belong to Andy Schleck, who certainly isn’t going to be losing much time at all over the next few days in all likelihood.