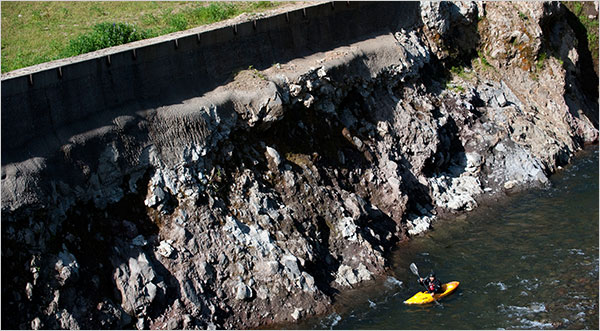 The New York Times has an interesting article up how the removal of dams from rivers across the country is proving to be a major boon for kayakers looking for new runs with plenty of rapids. The removal of the concrete structures has also benefitted the flora and fauna in the surrounding areas as well.

The story says that during the 1950’s and 60’s a new dam was built roughly ever six minutes, as the U.S. looked to hydro-electricity to meet it’s growing demands for power. Now, a half-century later, there are more than 75,000 aging dams out there. Some of them are being repaired and used, while others are being torn down completely, and in the process, it is altering the water flow along those rivers, and providing some great new whitewater for paddlers.

Approximately 430 dams have been destroyed since 1999 and the end of the article lists some of the places where dam removal had created new kayaking opportunities. For example, the Embrey Dam along the Rappahannock River in Virginia was removed in 2004 and it created a half-mile long paddling corridor with constant rapids, while along the Tuckasegee River in North Carolina, the Dillsboro Dam has been slotted for removal, and when it goes soon, it’ll create Class II rapids, and plans are already in the works for whitewater park.

The side benefit of these dams being removed is that the ecology around the area is improving too. There are reports of more fish in the streams and the land surrounding the dam sites has begun to reclaim areas along the river, with trees and grasslands sprouting up once again.

2 thoughts on “Dam Removal is a Boon for Kayakers”