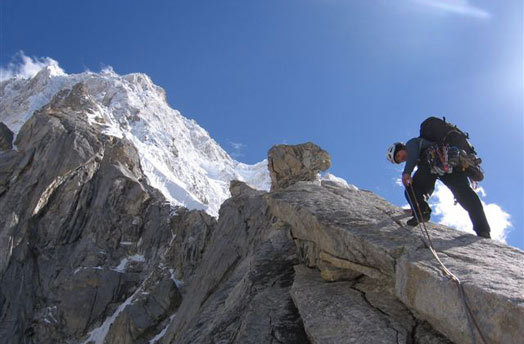 ExWeb has some good updates today from the Karakorum, where things are mostly winding down, as teams depart and begin preparations for the fall season in the Himalaya.

The biggest piece of news is that climbers are still getting organized on Latok I in an attempt to go up the mountain and look for Oscar Perez, who has been stranded above 6500m for six days now, and there hasn’t been any contact with him at all since the weekend. At this point, his home team has no idea what his condition is, and everyone is just hoping for the best. ExWeb says that five other Spanish climbers have left their home country and are headed for Pakistan to try to help out, but considering the remote nature of the mountain, time in transit, and so on, they won’t be in a real position to assist for some time yet.

Fabrizio Zangrilli is already on the scene however, and a fly over of the campsite resulted in no visual confirmation of Oscar’s condition. Fabrizio will attempt to climb up to Oscar’s position tomorrow, and assess the situation and possibly aid in bringing him down. Once again, lets all keep our fingers crossed for a happy ending here.

Meanwhile, in other news, the Arash Mountaineers team that has been working a new route on Broad Peak reportedly has abandoned the route after running out of supplies and time. They had established the route up to Camp 3, but now say that they’ll have to return to give it another go in the future. They do, however, plan to make a summit bid along the normal route before coming home.

And finally, fresh off of her 13th 8000m peak, Korean climber Eun-Sun Oh is expected to return home tomorrow, where she’ll take a much deserved break before returning to the Himalaya in September. At that time, she’ll set her sights on Annapurna, her final obstacle before becoming the first woman to complete all of the 8000m mountains. She is firmly in the driver seat now to claim that honor, as this story from National Geographic Adventure points out, but Annapurna won’t yield up its summit easily. In fact, many consider it to be the second toughest 8000m peak to climb, behind only K2. But the other contenders, Gerlinde Kaltenbrunner, Edurne Pasabán, and Nives Meroi have all hit snags in their bids to be the first woman to join the elite list of men to have topped out on the 8-thousanders. Miss Oh has come out of no where to knock off four of those mountains his year, and seems poised to claim her fifth in a few months.

Update: Mountaineer and author Clyde Soles has posted more info on the Oscar Perez story. Seems that the Spanish climber is actually on Latok II not I and that he is suffering from a broken arm and leg, which is why he is stranded at high camp. A radio malfunction or dead batteries might account for the lack of contact as well, so there is reason to believe that he is hanging on and waiting for a rescue. Hopefully we’ll know more tomorrow.

6 thoughts on “Karakorum 2009: Getting Organized on Latok I”