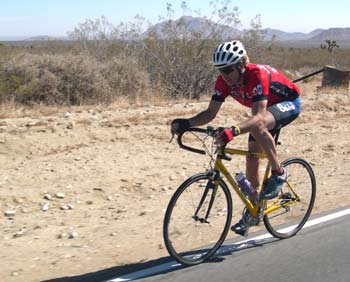 The Furnace Creek 508, one of the top endurance cycling events in the U.S., is set to get underway tomorrow from Santa Clarita, California, with racers dueling one another across the Mojave Desert, through Death Valley, and on to Twentynine Palms.

Billed as “the toughest 48 hours in sports, the Furnace Creek 508 is an ultramarathon cycling race that is brought to us by the same sadistic minds behind the Badwater Ultra. The race is legendary for its difficulty, as it mixes in 35,000 feet of elevation gain, crossing through ten mountain passes, and 508 miles of road that ranges from scenic altitude to desolate lowland deserts.

The number of entrants to the race is capped at just 200, and they are allowed to race solo or in two and four person relays. Many of those racers are on “Green Teams” who are dedicated to going easy on the environment and minimizing their ecological footprint while they race.

This is the 26th running of the Furnace 508, and they kicked things off today with some live webcasts. You can also follow the race at it unfolds on the official Twitter feed, and become a fan on their Facebook page. And while you’re at it, checkout the course profile hear. See that huge drop-off in the middle? Yeah, that’s Death Valley.

This looks like another amazing race and quite the endurance event. Can you imagine spending 508 straight miles in the saddle of your bike? My rear-end hurts just thinking about it. This is the equivalent of several days on the Tour de France rolled into one. With harsh climates to deal with as well. Should be fun to watch. Good luck to all the riders!