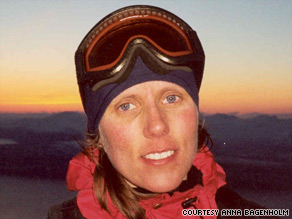 CNN.com has an amazing story today about a skier who fell into frigid waters, spending an extended time beneath the surface, only to be pulled out, and eventually revived, and in the process redefining the effects of hypothermia on the human body.

The accident took place back in 1999 in the city of Narvik, Norway. Narvik is a mountain town known for its spectacular views and amazing skiing, which is exactly why Anna Bågenholm chose it as the location to do her medical residency. Back on that fateful day ten years ago, Anna and her friends were skiing off trail when she took a tumble down an ice gully and ended up going head first through a hole in the ice, into the water. Anna’s friends immediately went to her aid, but were unable to pull her from the rushing waters. Calling for help, a rescue helicopter was dispatched to retrieve the trapped skier, but by the time it arrived, Anna had been under the ice for more than 80 minutes.

After being airlifted off the ice, the helicopter sped towards the nearest hospital, but Anna showed almost no signs of life. Her body temperature had dropped to just 56º F and her pulse was non-existent. For all intents and purposes, she was dead, and all attempts at CPR proved fruitless.

But the doctors wouldn’t give up, and they decided to not declare her dead until her body had completely warmed up. So, they hooked her up to a machine that slowly warmed her blood, and began to raise her body temp. After three hours, her heart began to beat once again, and Anna returned from the dead.

The story is an amazing one that reminds us that we don’t know as much about the human body as we’d like to believe some times. It is an incredible machine that is strong and resilient, even beyond or own expectations. Obviously Anna survived this incident, and now leads a completely normal life that includes skiing and being a radiologist at the hospital that saved her life.

Thanks to Jon from The Rest of Everest for sending this my way. Great story!