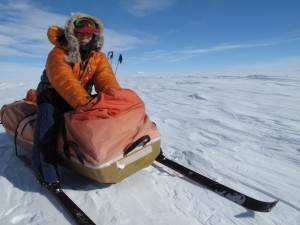 With weather improving and momentum in their favor, the adventurous men and women already in the Antarctic have started to make real progress in their expeditions, while others leave home for Punta Arenas, as they make the final preparation for their polar adventures as well.

Updates from Eric Larsen and the Save The Poles Expedition indicates that they are off to a good start, covering more than 8 nautical miles in five hours time yesterday, their first real day out on the ice. An update to his blog also offers up some interesting information on how he approaches a journey such as this one, in which there are so many ways that you can fail, including gear issues, slow moving, injury, and more. But to make things easier and to stay focused, Eric takes a systematic approach to organization and staying focused on the goal. Interesting stuff to say the least, and probably applicable to any long distance trek in just about any environment.

Ryan Waters and Cecilie Skogs are also making good time in their unsupported trek to the South Pole. From what I can tell, they were the first team out from Patriot HIlls, and have been very focused thus far. Their latest dispatch, from two days ago now, says that they covered 18.2km (11.3 miles) on that day alone, with the weather conditions working together to provide the perfect skiing conditions. They ended the day with a hot chocolate in the tent, which, for my money, is a perfect way to end any cold day!

The Kaspersky Commonwealth Team have set off on their training run after repairing their tents that were damaged in high winds last weekend in Patriot HIlls. In their latest dispatch, they note that the high winds remain, but they have become a part of everyday life in Antarctica, and moral remains high amongst the group. They’ll continue their training run for another day or two, testing out their equipment and getting a feel for life on the ice, before they finally turn their skis south, and their eventual destination at the Pole.

Meagan McGrath has left Canada at long last and is now on her way to Chile, where she’ll get her gear organized before ALE takes her to Patriot Hills as well. Meagan posted new audio dispatches to her page before setting out from Ottawa, and she says she should arrive in Punta Arenas tonight. From there, she’ll spend the next few days buying last minute gear and food, organizing her coms plan, and posting a few more updates to the website. With any luck, she’ll be off to Antarctica by early next week.

Finally, catching up with Børge Ousland and his crew in Patagonia, where they continue their expedition across the icecap there. In his most recent update, Børge notes that the team was hit with more than 50 cm (19 inches!) of snow over night, which they thought would lead to slow going. Despite that however, they managed to knock off 16.5km (10.25 miles), although conditions deteriorated later in the day, and they made camp in white out conditions after 9 hours on the trail. So far, the team is content with their progress, but are worried about their fuel supply, amongst other things, if the current weather pattern persists.