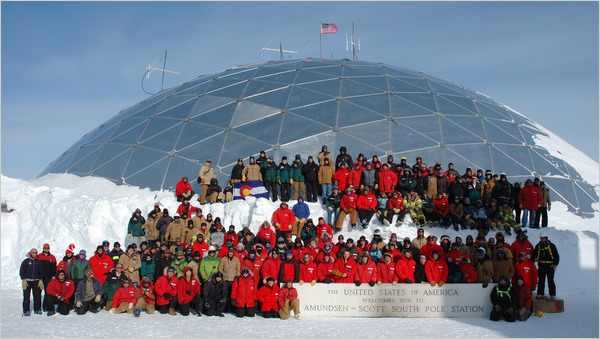 The iconic geodesic dome, which has stood at the South Pole for nearly 30 years, is scheduled to be demolished at the end of this Antarctic season, having already been replaced by a newer structure. But according to this story from the New York Times, a group of polar explorers are hoping to have the dome dismantled and sent back to the U.S. to be reassembled as a monument to the country’s dedication to exploring and protecting Antarctica.

The Amundsen-Scott South Pole Station is managed by the National Science Foundation, and that organization has already agreed to salvage a portion of the dome for use in a museum, but some think that the entire dome should be taken apart, piece by piece, and bolt by bolt, and shipped home. The NSF says that would cost more than $500,000 above their initial budget.

The dome is 165-feet in diameter and covered several modular buildings that served as home for more than 200 researchers and support staff during the summer months. In the winter, that number would drop to less than 50, and in recent years, the place has mainly been unused, with a newer, more efficient structure taking over the duties.

If only I had a spare half-million dollars sitting around. I’d buy the dome and put it up in my backyard! How cool would that be? Of course, there isn’t much need for a dome such as this one in Texas, unless I can figure out how to air condition it too.

10 thoughts on “South Pole Dome Looking For A Home”