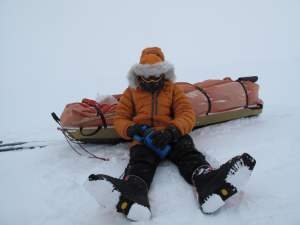 It was another busy weekend in the Antarctic, where the snow has been falling in bunches, but teams continue working towards their respective goals. Progress has been a bit slowed by the fresh powder, but spirits remain high amongst the explorers.

We’ll start with an update on Meagan McGrath, who you’ll recall fell into a crevasse last week and had to be retrieved by ALE. It was reported at the time that Meagan had suffered bruised ribs, and was a bit beat up, and was considering her options for continuing the expedition. Today, she updated her website with an audio dispatch announcing that she would be continuing the journey South, resuming from a spot a bit further inland. She expects that it will take her about 40 days to reach the Pole, but cautions that there are no guarantees when traveling in arctic environments. Meagan hit the trail again this morning, but was expecting a short, light day of travel while she re-acclimated to the environment.

Meanwhile, the seven ladies on the Kaspersky Commonwealth Team reached a couple of milestones over the weekend by first reaching a turning point on their expedition, quite literally. So far, the team had been traveling southwest out of Patriot Hills, running parallel to the Pensacola Mountains. They have now turned due south however, and are making a direct bearing for the Pole. They’ll of course, continue on that heading right through to the finish of the expedition. Their other milestone came in the way of reaching their first resupply point at Thiels, where they were happy to get fresh food, clean underwear, and a few other goodies as well.

It has been a few days since Eric Larsen and his team, which includes Dongsheng Liu and Bill Hanlon, have sent an update, but it sounds like conditions were less than ideal in their most recent report. The weather took a turn for the worse, and the boys spent a full day in whiteout conditions, skiing ten hours, and covering more than 14 nautical miles in the process. Remember folks, this the austral summer in Antarctica, and yet the snow still flies freely and conditions are as harsh as you’ll find anywhere else on the planet. Lets hope the past two days have been better for Eric and the team.

Ryan Waters and Cecilie Skog also ran into plenty of snow over the weekend, remarking that it sure does fall a lot on the continent that is suppose to be the driest on the planet. The fresh snow has made the sleds seem heavier, and the pace has slowed some. As a result, the pair, who are making an unsupported trek to the Pole, have added an extra half-hour of skiing each night to help compensate.

That’s all for now. More updates as the week progresses I’m sure. Still a very long way to go before any of these folks reach the Pole, and lots of challenges between now and then.