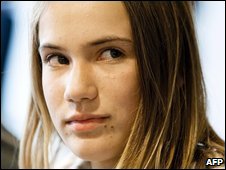 Laura Dekker, the 14-year old girl who had hoped to make a solo circumnavigation sailing attempt a few months back, but was subsequently barred from doing so by the Dutch government, went missing over the weekend, and was later found on the Island of St. Maarten in the Caribbean.

According to this story from the BBC News, relatives reported the young girl missing three days ago, and Dutch newspapers reported that she withdrew $5000 from her bank account before fleeing to the island. Dutch courts had ruled that Laura was to remain under supervision of the State until the school year ended in July to ensure that she didn’t go ahead with circumnavigation attempt, despite the barring of that adventure. Authorities are still weighing the idea of someone so young hitting the open ocean on their own.

The BBC says that a local woman recognized Laura and alerted authorities to her whereabouts. A lot of questions remain regarding just how she got to St. Maarten, and whether or not she was assisted by anyone in doing so. Her father is a strong supporter of her making the voyage. It should be noted that her boat, the Guppy, is still in its slip back in the Netherlands.

I’ve written my thoughts on Laura a number of times already and it remains the same. I still believe that she is far too young to set sail on her own, no matter how much sailing experience and knowledge she has. Something about this story makes me very suspicious as well. Perhaps the plan was to send her off to St. Maarten and get her underway, with a different boat of course, over the holiday break, and before too many people noticed, so she would be well into the voyage before anything could be done. Perhaps I’m looking too deeply into this, but that’s the first thought that comes to my mind. This already odd story grows even stranger, and it’ll be interesting to see how this all plays out. Either way, I don’t believe this will help her cause when the case comes up for review next summer.

Update: There is more information on this story has begun to come to light, thanks to this story from the Times Online. It seems that Laura may have run away from own, possibly on her own and likely to set off on her sailing journey by herself. Apparently she left her father a note before she set off, although the contents of that note are as of yet still unknown. Her father has supported her right to sail from the beginning, and has been her staunchest defender. According to the Times, Laura is now on her way back home to Holland, where I’m sure this little incident will play poorly with the Council of Child Protection, who are charged with overseeing her case.

On a side note. When I was 14 if I had planned to run away, it probably would have been down the block. This kid hops a flight to the Caribbean. She certainly has nerves of steel, although I stand by my thoughts that the high seas are no place for a 14-year old to be sailing solo.