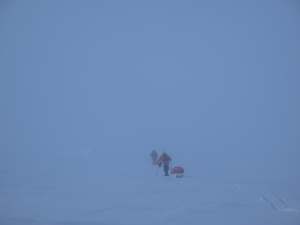 The polar explorers are finding plenty of challenges in their struggle to make progress in a northerly direction. For some, they continue to battle negative drift, while for others, the drift seems to have lessened , but now it’s back to rubble fields and a new twist, whiteout conditions.

Whiteout is exactly what Amelia Russell and Dan Darley faced today as they began their daily trudge. Amelia reports “zero visibility” on their trek, and they were immediately faced with a 30 meter lead, which made the going tough right off the bat. They had set a goal or hitting 9 nautical miles, and were able to achieve 7.7 despite the adverse conditions. The good news is that the drift seems to have subsided, and they woke up in the same position today that they went to be last night. Not losing ground is major progress at this point.

Speaking of being frustrated with negative drift, Eric Larsen’s comments give an indication of just how bad it has been for the teams. A few days back he mentioned that he, along with teammates Antony Jinman and Darcy St Laurent, had crossed the 85ºN mark FIVE times thanks to their on going battle with negative drift. They believe they have crossed it for the last time though, and now feel a bit better about their progress, having only drifted 27 feet to the south last night. But while the drift has subsided for now, they have had to endure long swims in the Arctic Ocean, yesterday they were out on the water for over an hour, and have had to struggle through rubble fields and around big leads. Still, they’re making positive progress, and happy about that at the moment.

Solo explorer Christina Franco has had similar challenges the past few days, waking to whiteout conditions yesterday, and facing a vast rubble field today. At this point she is still more than 300 miles form the Pole and reports that she is exhausted. Drift continues to be a problem for her, and she has yet to cross 85ºN, but she remains upbeat on her audio dispatches, as she continues to tackle one problem after another. She’s not giving up on her dream of becoming the first woman to make it solo to the North Pole, but she knows that progress needs to improve soon for that to become a reality.

On the other hand, Aussie Tom Smitheringale seems to be moving along quite nicely at this point, and has found his groove. His frostbitten fingers aren’t giving him as much trouble as they were a few days ago, or at the very least they aren’t getting any worse, and he reports that he has come across some large, expansive pans now, which are flat, open areas that make progress north much, much easier. If these pans hold out, he’ll pick up speed quite quickly, and cover good ground. It is what every polar team is hoping for at this point. Tom also reports that he gets through his days dreaming of his home and Fremantle, and all the great food he is going to eat when he returns.

A few days back I reported that Ben Saunders was preparing to hit the ice, and begin his attempt at the speed record to the Pole. He hoped to cover the distance in just 30 days, but those hopes are dashed now, as the word from his home team today is that Ben cracked a fuel canister a few days back, and the fuel melted through the food containers, contaminating more than 70% of his food. The plan was to go unsupported to the Pole, and Ben doesn’t want to make the journey any other way, so he’s now on his way back to Cape Discovery, where he’ll get a pick-up once the weather clears allowing a plane to land. Once he’s back in Resolute Bay, he’ll reevaluate the situation and determine if he can restart the expedition. You may recall that Ben made a similar attempt on the Pole back in 2008, but had to abandon that expedition when his skis broke down.

Stay tuned for more news from the Arctic. With teams finally starting to clear the drift zone, hopefully speeds will begin to pick up, and we’ll start seeing positive progress on all fronts very soon.