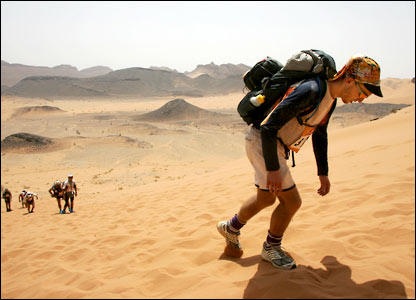 Competitors from around the globe are descending on Morocco where they are preparing to compete in what some call the most challenging footrace on the planet, the Marathon des Sables.

The race is a six day, 243km (151 mile) race that takes place annually in the Sahara Desert. Over those six days, the competitors will run the equivalent of five-and-a-half marathons, usually in very trying conditions. Temperatures often exceed 120ºF and the brutal sun only gives way to blowing sands that can make for extremely challenging conditions for the racers. As you can imagine, that heat and sand can play havoc with your feet as well, turing them into a blistered mess after just one day.

As if running a marathon under those conditions wasn’t challenging enough, the competitors will also have to carry all of their gear (save their tent!) and water with them as they go. Each checkpoint will ration out more water for them, but other than that, they must be completely self sufficient while in the desert. This is especially important on the 4th day, which is usually the longest, and often stretches well into the night.

Now in its 24th year, the Marathon des Sables, or Marathon of the Sands, is considered one of the grand jewels of endurance sports. It is challenging on many levels, and attracts some of the top ultramarathon athletes from around the globe each year. 2010 will be no different, as dozens of runners are now assembling, and preparing to get underway in a few days time.

Good luck to all the racers. Enjoy the challenge and the scenery.