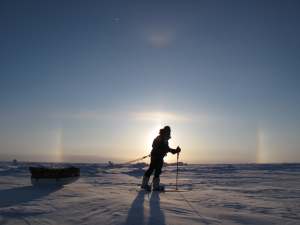 The arctic continues to challenge the polar explorers at every turn with massive ice fields, open leads, and negative drift all taking their toll. For one of those explorers, enough was enough, while others continue to their way north.

We’ll start with Christina Franco, who was evacuated from the ice on Friday after spending three days trying to find a way around an open body of water. Christina traveled east, rather than north, for that entire time, and still couldn’t find a way to cross that lead. It was a struggle, as she knew that the days were already running short, and with negative drift still working against her, she elected to hitch a ride on a resupply plane, rather than continue the journey. The pilots on that plane said that she was stuck on a large, narrow, piece of ice, and that there really wasn’t much of a way forward for her. Reportedly, Christina is already back home in London, and as a result, she won’t become the first woman to go solo to the North Pole. At least not this year. This move has to come as a disappointment for Christina, who had to abandon her quest last year following major equipment failure. I wish her the best of luck. I hope she’s enjoying a warm bed and good food, but is already plotting for next season.

Christina wasn’t the only one contemplating extraction. Aussie Tom Smitheringale was all but ready to call off his solo expedition as well, as the frostbite in his fingers had gotten to the point where he was in agony every step of the way. Tom consulted with his home team over the weekend, and was ready for an extraction as well, but finally decided he wasn’t ready to give up yet, despite the pain and possible loss of digits. He is continuing on today, with a bit of urging from polar legend Børge Ousland, and is hoping to make up for lost time, although he is battling negative drift once again too.

Eric Larsen’s Save the Poles Expedition, which includes Antony Jinman and Darcy St Laurent as well, spent Easter Sunday working towards another milestone. As of yesterday, the boys were closing in on 87ºN, which is great progress, despite the continued negative drift that they’ve been facing as well. Eric did report that the drift wasn’t as bad as they expected, and when the sun was out, it was actually quite pleasant. Being a holiday, each of the men took turns on the satellite phone calling their families and soaking in the well wishes. It was good for team morale and a welcome respite from the long days out on the ice.

Finally, Amelia Russell and Dan Darley are back on the polar treadmill as well, having lost 2 nautical miles over night. They did gain more than 10nm later in the day yesterday however, and spent their Easter Sunday with sunshine and relatively calm winds. The duo reports that they are now five and a half weeks into the expedition and are feeling quite exhausted at this point. They mention that they are doing 11+ hours of intense exercise each day, while pulling the sleds, and having little food and sleep at night in the tents. That has begun to really take it’s toll, although aside from being tired, they are not experiencing any other physical issues, including frostbite. The good news is that they are now covering more mileage per day than what they would need to average to actually reach the Pole on time. That means they’re picking up speed and progressing very well, and while the end is in sight for the two Brits, it is still a good ways off yet.