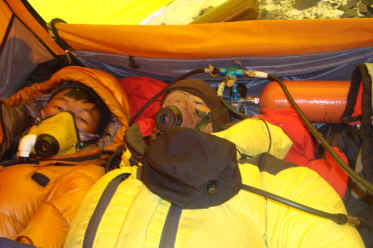 High winds that plagued the teams on Everest the past few days have abated some, opening the weather window that is expected to extend through the weekend. As a result, the climbers are on the move again, as they head up to Camp 4, with many hoping to hit the summit tonight.

The high winds yesterday forced some teams, who were en route to Camp 3, to turn back and settle in at Camp 2 instead. The Peak Freaks reported in from Camp 4, where they say that a number of teams are arriving to find their camps completely destroyed by the constant gusts the past few days. Tents and gear have been swept off the mountain, and as a result, some of the climbers may be facing a setback unless more gear can be brought up on time. Fortunately for the PF team, their camps are okay, and their next group of climbers are now in place to go up to the summit.

The First Ascent Teams are both in Camp 2 today, after Melissa Arnot and Dave Morton were one of the teams that turned back while on their way to C3, due to the winds yesterday. As a result, they’re hanging out with Dave Hahn and Lief Whittaker, who were one day behind them in the rotation, but now they’re moving on the same schedule, and may work their way up to the summit together. Hahn is, of course, going for his 12th summit of Everest, the most by a non-Sherpa, with the hope that they’ll top out on Monday.

Also going for a record is Apa Sherpa, who is en route to Camp 4 at the moment, and hoping to make his summit bid tonight as well. If successful, it’ll be his 20th time on top of the mountain, extending his own record. According to his Twitter feed, the weather conditions are excellent as of this writing, and it looks like all systems are go for Apa to head up today.

Chad Kellogg is also hoping to make his attempt on the mountain tomorrow, with an eye on the summit as well. You may recall that the Outdoor Research sponsored athlete is hoping to make a speed climb of the mountain, going from BC to the top in one single push. He plans to set off tomorrow morning at 4:30 AM local time. He’ll be carrying a SPOT Tracker, which should allow all of us to follow along with his progress as he goes. Chad hopes to go to the summit and back in record time. Hopefully the traffic on the mountain tomorrow won’t delay him too much.

On the North Side of the mountain, similar stories are being told of teams moving up, and hoping to be in position to take advantage of this weather window. Amongst them is Jordan Romero, who is now reportedly in Camp 3, and feeling strong. Jordan’s team reports that the skies have cleared, and they can see all the way up to the summit, which bodes well for those climbing from the North Side this weekend. If Jordan stays on the regular schedule, it will appear that he’ll be in position to make his official summit bid on Sunday. Stay tuned for more on that!

Finally, one last word on the weather. This current window looks like it’ll stay open through Monday or so, and after that things get dicey. The next three days are likely to be very busy, with traffic jams, slow moving climbers, and all kind of other issues. Out in the Indian Ocean, a cyclone is starting to exert its will, and that is going to have a profound, and likely lasting, effect on the chances for anyone topping out of Monday or Tuesday. Lets hope everyone is safe going up and down the mountain this weekend. Good luck to all the climbers!