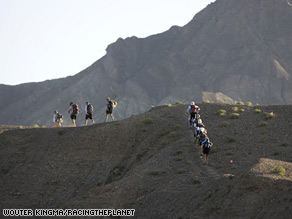 The 2010 edition of the Gobi March is set to get underway this weekend, with more than 150 ultra-runners from around the globe descending on Urumqi, China to begin a week long stage race through the grueling environment of the Gobi Desert.

The Gobi March is part of Racing The Planet’s 4 Deserts series of ultramarathons. This one takes place in far western China in the city-oasis of Turpan, in the Xinjiang Autonomous Region. Each day will mark a stage of the race, with runners setting out in the morning carrying the supplies they will need for the day. The weather is traditionally quite warm, and dry, as you might expect from a desert race, and back in 2005, it actually reached 122ºF on one of the stages.

At the end of each stage, the competitors will rest for the night in a tent city that is constructed for them by the race organizers. They’ll have food, water and shelter while there, but once they hit the trail, it is up to them to make their way between checkpoints carrying their own gear and navigating through the open desert. The top competitors will finish the all six stages in a combined time of roughly 25 hours, but the bulk of the pack will be much further back than that. Day in and day out, this can be quite a difficult event, as the participants are essentially running nearly a marathon each day, in some of the most extreme conditions on the planet.