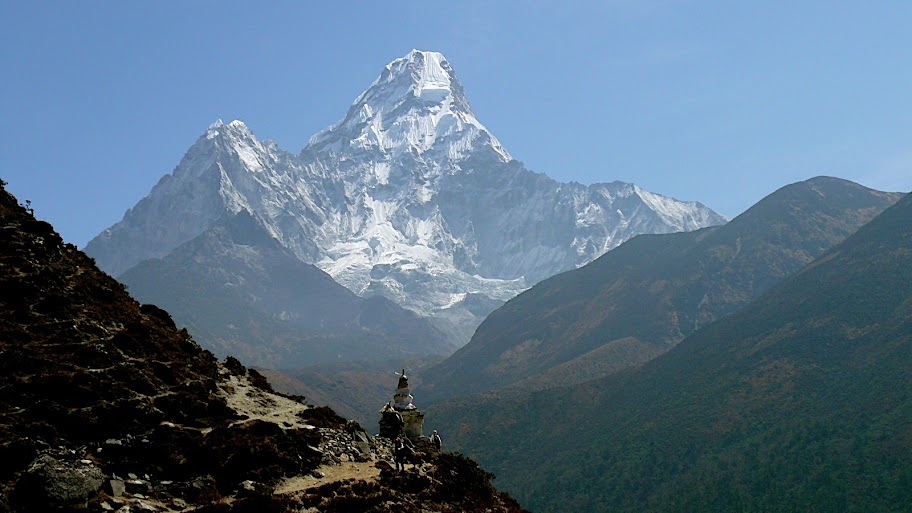 After posting my impressions of Namche Bazaar a few days back, the next edition of my Himalayan High series is now available over at Gadling. This story is further impressions of the trek itself while on the trail and hiking ever closer to Everest Base Camp.

As I mention in the story, the trail really does change after you leave Namche. For the most part, the villages grow ever smaller, there are fewer creature comforts, and the prices for food and drink prices climb as you do. But on the up side, the scenery just gets better and better the further you go, and the sense that you are on a grand adventure to a remote and distant place continues to grow as well.

Visiting the different villages along the way, such as Tengboche, Dengboche, and Gorakshep, was a bit surreal for me. I’ve written about those place a number of times over the years, but had no real attachment to them other than that they were stops along the way to Everest, and places for the climbers to rest and acclimatize. Now, when I read about where they are at on the trek, I have a clear picture, and understanding, of the places they are visiting. It makes the whole experience that much more personal.

The trail definitely gets harder above Namche as well. The altitude can begin to take it’s toll, and wreak havoc with your body. Two members of my trekking team were forced to go back down the mountain for instance. Both were sick, but one was in incredibly bad shape for awhile. Her energy levels were non-existent, she was physically sick, incoherent, and even starting to turn a little blue. Worse yet, she didn’t bring her travel insurance papers with her, which meant she couldn’t be air lifted from the mountain, even though she was in bad enough shape for that to happen. Instead, our porters had to carry her down the mountain to a lower village, and a nearby aid station, where she recovered fairly quickly. Unfortunately though, the trek was over for her, and she was forced to remain in Namche Bazaar until the rest of the group came down several days later.

Such are the hazards of trekking in the Khumbu Valley. Altitude does funny things to the body, and we all react differently to it. Most of the group suffered from headaches and nausea to varying degrees, but for the most part, I had very few ill effects due to altitude. In fact, I mostly suffered the same fate I did on Kilimanjaro a few years ago, an inability to sleep that can really wear on you after a few days. While I enjoyed the trek immensely, I can tell you that it is rather boring to lie in your sleeping bag for hours on end, waiting for dawn.

Still, it could have been much worse, and there were definitely members of my group who suffered greatly along the way. The trek is not an easy one for the unprepared, and it can be exhuasting both physically and mentally. My advice to anyone consider the trek, definitely be as physically prepared as possible. Run, jog, hike, what ever. Mix in some BIG hills to prepare for the experience, and you’ll be a much happier traveler.

More to come soon. The next story will actually be about the last leg to Base Camp, and impressions of the place. For now, enjoy this video of some of the views. 🙂

2 thoughts on “Everest Base Camp Trek: Back On The Trail”