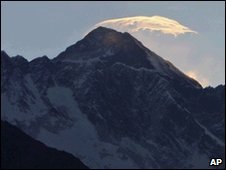 Bad news for prospective future climbers of Mt. Everest. According to this story from the BBC, global climate change is having a direct effect on the world’s tallest mountain, and it is making it more difficult, and more expensive, to climb.

With the 2010 spring climbing season behind us, Sherpa mountain guides are returning to Kathmandu and are reporting a significant loss of snow and ice on the mountain, mostly due to the effects of global warming. Because of that loss of snow and ice, there is far more exposed rock on Everest, which make it more challenging to scale. Traditionally, climbers would use crampons and ice axes to assist in their climb, but neither of those is effective on rock. As a result, future climbers will most likely have to deal with more technical climbing challenges, something that becomes all the more difficult at high altitude. As a result, mountaineers are likely going to need a more refined set of climbing skills to tackle Everest.

Furthermore, those future expeditions are likely to become more expensive, as the teams have to deal with the increased level of danger. The article suggests that it costs “at least $70,000” to climb Everest now, but that is likely to go up in the years ahead. More technical climbing gear will probably be necessary, helping to inflate the costs, and more guides will need to assist in the climb as well.

I heard this story on the radio as I was driving into work this morning, and was surprised to hear Dawa Stephen Sherpa talking about how quickly the snow and ice are retreating on Everest. He seems convinced that this will have a direct and immediate impact on the climbing conditions on Everest in the very near future, and that it could even limit the number of people who will be able to make the climb. The cost of an expedition is already quite high (although you can go for less than $70,000), but if this trend continues, it sounds like it’ll really move into a new realm of expensive.

Either way, if you’re planning on climbing Everest in the future, you may want to brush up on your rock climbing skills. Seems like you’re going to need them.

3 thoughts on “Everest Getting More Dangerous, Expensive To Climb”