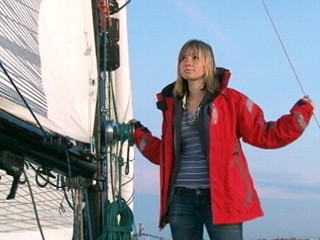 Scary news is coming in regarding Abby Sunderland, the 16-year old girl who is attempting to solo circumnavigate the globe. According to this story from ABC News, the California teenager may be lost at sea after setting off two distress signals calling for help from her support crew.

According to the report, Abby was fighting 20-25 foot waves and 35 knot winds at the time that she activated the beacon. At that time, her support crew had been in touch with her, and Abby indicated that she had been knocked down twice. That was earlier today, and since then there has been no contact.

Abby had set out from Cape Town, South Africa two weeks back following some repairs to her boat, the Wild Eyes. She is reportedly now 400 miles away from the closest ship, and Reunion Island, near Madagascar, is the closest land.

After speaking to her support crew at home, Abby was going to attempt to make a few repairs on the boat, then call them back. Since then, there have been only the two distress signals. Rescue ships are said to be en route, but it is a long way out to where she was last known to be, and the bad weather will not help that process.

I’ll post more info as it becomes available. Please keep Abby in your thoughts, and hope for the best. As someone who has followed her progress since before she ever hit the water, I’m feeling really sad about this news at the moment.

Thanks to my friend Mitch for alerting me to this breaking news.