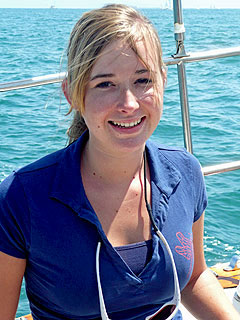 Yesterday Abby Sunderland finally arrived back in the U.S. after meeting up with her brother Zac on the appropriately named Reunion Island on Saturday. The teen sailor, who lost her ship to a storm in the Indian Ocean back on June 10th, took the opportunity to fully address the media for the first time, says that she is not done sailing, although she has other things in mind for her immediate future – namely getting her driver’s license.

Abby used her forum with the media yesterday to set the record straight on a number of issues, describing the storm in more detail and correcting some misconceptions about what happened. She said that the storm was not an especially bad one, and was what she expected being in the Southern Ocean during the winter. She also said that her boat, the Wild Eyes, was not knocked down as was reported widely in the media, including here in this blog. Instead, a rogue wave hit her boat as the storm was actually dissipating, and it was that wave that snapped her mast, stranding her at sea.

Abby reiterated that she is very proud of her accomplishments despite the outcome, and that she does plan to attempt to circumnavigate the globe again, but not for a couple of years. Instead, she wants to get back to normal life, going to school, hanging out with friends, and so on.

Meanwhile, Abby does have a new brother, as her mom gave birth to Paul-Louis Sunderland, who weighed in at 8 lbs., 9 oz, yesterday morning. The child is the 8th of the Sunderland kids, and was named for the French captain who’s fishing boat came to Abby’s rescue. There is no word yet when Paul-Louis will begin his circumnavigation attempt. 😉