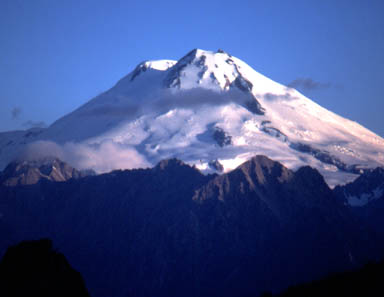 Last week I posted a story about the Seven Summits, Seven Flights Team, who were just setting off on their quest to climb the Seven Summit and then paraglide off of each of them. They had hoped to begin with Denali in June, but were denied access because of permit issues, but were instead en route to Russia, where they would attempt Elbrus.

According to the expedition’s blog, the team reached the summit of Elbrus, the highest peak in Europe, on Tuesday, and did indeed fly off the summit. Reading the story however, it seems like it was much tougher than they expected, both on the climb and then the takeoff of the flight as well. During the climb the team suffered the usual issues with altitude, including headaches, nausea, etc., but despite all of that they reached the 18,510 foot summit by 11 AM local time.

The blog entry also says that it was a clear, beautiful day for a climb, but not so much for a flight. There was zero wind, which made it very difficult for them to get up to speed and lift off in their paraglider. They had to run quite quickly to achieve flight, and anyone who has ever tried to run at altitude can tell that isn’t easy to do. Despite those challenges however, they did manage to get airborne and successfully fly from the summit, which means they have one summit down, and six to go.

Yesterday, the team posted another blog entry, this time sharing their thoughts and feeling on reaching their first goal. As you might expect, they seem tired, recovering from the altitude, but generally in good spirits and happy to have made the first climb.

No word on which of the Summits is next, but a hearty congratulations to the team for getting off to a good start.