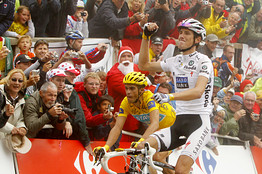 Today was the day that fans of the Tour de France had circled on their calendar since the course was first announced. A deciding stage if ever there was one. Stage 17 would send the riders on a 174km (108 mile) ride that would end on the summit of the Col du Tourmalet and would likely have a direct impact on who would be wearing Yellow when we head to Paris on Sunday. The grueling climb up the Tourmalet is legendary, and the top climbers battled it out on the slopes of that famous route, in the end though, little changed in the over all standings, but it likely means that the 2010 Tour is, for all intents and purposes, over, with two competitive days of riding yet to come.

As we all know, heading into today, just 8 seconds separated Alberto Contador and Andy Schleck, with Contador wearing the Yellow Jersey thanks to a mechanical problem on Schleck’s bike on the final climb on Monday’s 15th stage. Controversy swirled in cycling circles as fans debated whether or not it was the right move on Contador’s part to attack while his rival suffered a break down. Some said that it was part of the sport, and Alberto should take advantage of every opportunity. Others thought that it would taint his win, and that he should have waited for Schleck so they could duel one on one.

All of that is water under the bridge at this point. Today it came down to a climbing competition between the two men, with the rest of the Peloton chasing behind the two leaders. Over the course of the final push up the Tourmalet, neither man could shake the other, and while Schleck looked a bit fresher, Contador stayed with him on every move. It wasn’t exactly a sprint to the finish line, although Schleck did claim the stage win with a final push that put him about a half bike length in front.

The stage win is small consolation however, as the two men finished with the same time, leaving Contador still 8 seconds out in front. Alberto is the better time trialist of the two riders however, and that makes it very difficult for Andy to try to catch him on Saturday’s penultimate stage, which is a 52km (32.3 mile) time trial that will decide who goes into Paris with the win. The question is, can Schleck make up 8 seconds of time on Contador? Possibly, but it is highly doubtful.

In the race for the other jerseys, the competition is still quite close. Especially for the Green Jersey that belongs to the top sprinter. Thor Hushovd is back in Green, but Alessandro Petacchi is only a few points back. These two men will be fighting it out all the way to the Champs Elysees on Sunday I’m sure. Petacchi seems to be the faster man in the sprints right now, and has done a great job of rejuvenating himself this year. Anthony Charteau has a nice lead in the Polka Dot Jersey and seems to have wrapped up the King of the Mountain this year. The last three stages will have no effect on outcome of that competition. Finally, the White Jersey for the Tour’s best young rider once again goes to Andy Schleck, and that won’t change before Paris either.

Tomorrow, the sprinters will take center stage once again. The route is a 198km (123 mile) ride from Salies-de-Béarn to Bordeaux that is mostly flat and should be relatively flat. While the GC contenders wait until Saturday to have their final word, the burners will be working hard for more Green Jersey points. It should be fast and furious, but Saturday will be the one to watch.

So? What do you think? Does Schleck have a chance?