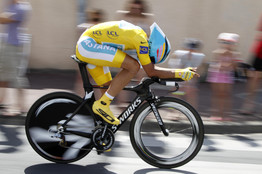 On the penultimate day in the 2010 Tour de France the riders faced a 52km (32.2 mile) individual time trial that would see them out on the road alone and racing against the clock. Heading into the day, the race came down to a two-man duel between Alberto Contador and Andy Schleck, both of whom were pre-race favorites, and have done little to disappoint over the past three weeks.

Today’s time trial ended as we expected, although for a time it looked like the results could be in doubt. Contador went into the day 8 seconds ahead of Schleck, but is considered to be a much better time trialist, meaning that Schleck would have to have the ride of his life to take the Jersey from Contador.

At the first time check out on the road, it looked like that could be a possibility. With both men through that point on the course, Schleck had taken back six seconds and was within striking distance of his rival, but from then on Contador focused in and began to take time back from the younger man, increasing his lead with each of the subsequent checkpoints. When the day was done, Contador finished the time trial in fine form, and completed his Tour win by 39 seconds. He’ll now make the ceremonial ride into Paris tomorrow as the 2010 champ.

The 39 second difference between first and second place is an ironic one, considering that is the exact amount of time that Contador took back from Shleck on Monday when Andy dropped his chain on the final climb of the day. Alberto was criticized by some for attacking while his rival had a mechanical problem, as there is often a gentleman’s agreement to hold up in those situations. Few riders want to actually win the race in that manner, and Contador’s detractors will certainly be quick to say that his win this year is a tainted one.

With the time trial over, three of the four race jerseys are now decided. Contador owns Yellow for the third time, and Schleck once again takes White as the best young rider of the Tour. The King of the Mountain title goes to Anthony Charteau, who will go home with the Polka Dot Jersey as the best climber this year. That leaves just the Green Jersey to be decided with the sprinters going head-to-head tomorrow on the Champs Elysees. At the moment, Alessandro Petacchi wears the Jersey, but he’ll have to hold off Thor Hushovd, who is currently in second place, and the Manx Missile, Mark Cavendish, who has four stage wins this year and is charging hard at the moment. Cavendish would like nothing more than to return to the U.K. with the sprint title.

The ride to Paris tomorrow is a simple affair, just 102.5km (63.6 miles) that begins in Longjumeau. Out on the road, there will be no attacks, but once on the Champs Elysees, the sprinters will burst out of the peloton, and rush for the last of the points. That’s where the excitement will be, and likely the only real excitement of the day.

For those wondering, Lance Armstrong finishes his final Tour de France nearly 40 minutes behind the leaders, in 23rd place.