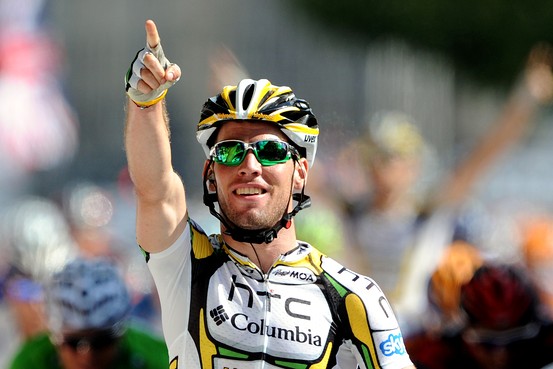 With the Pyrenees behind us, and the big showdown on the Tourmalet between Andy Schleck and Alberto Contador over, the Tour de France returned to the flatlands today, giving the sprinters a little relief, and letting them stretch their legs at last. The stage was a mostly paint by number affair, that ended quite predictably.

For the most part, the peloton was content to ride the stage without pushing it incredibly hard. It was 198km (123 miles) of very flat riding, a welcome respite from the mountain the cyclists have endured for most of the past week and a half. It was a scenic trip from Salies-de-Béarn to Bordeaux that featured the usual breakaway, that was inevitably reeled back in near the end, followed by a mad dash for the line by the top sprinters in the world.

The stage win went to Mark Cavendish, who once again made it look easy. Remember back in the early days of this year’s Tour when everyone was wondering what was wrong with Cav? Turns out, nothing was wrong, he just needed the right opportunities. He went on to win four stages at this year’s race, a fine accomplishment for any rider. He was followed across the line by Julian Dean and Alessandro Petacchi, who grabbed the Green Jersey back from Thor Hushovd in the process.

In terms of the General Classification, nothing has changed today. Contador still sits 8 seconds in front of Schleck, and their respective fates will be decided in tomorrow’s individual time trial. As a result, heading into the TT, Contador is still in Yellow and Schleck has a firm lock on White Jersey as the Tour’s best young rider. The Polka Dot Jersey, which goes to the King of the Mountain, has already been awarded to Anthony Charteau, as there are no more KOM points to be earned.

Which bring us to the Green Jersey, which it seems will be decided on the streets of Paris on Sunday. The current standings have Petacchi ahead of Thor by ten points, with Cavendish another six points behind Hushovd. All three men are in a position to win the Jersey, although if Cav races on the Champs Elysees the way he did last year, my money is on him. It should be fun to watch, and will give us a reason to tune in despite the GC already being locked up.

The time trial tomorrow will be 52km (32.3 miles) of flat out racing, with the Yellow Jersey up for grabs. The question heading into the day is whether or not Andy Schleck can gain more than eight seconds on Contador, who is amongst the best TT riders in the world. It’s going to take a titanic ride by Schleck to do so, and personally I think the odds are against him, but it should be interesting to watch.