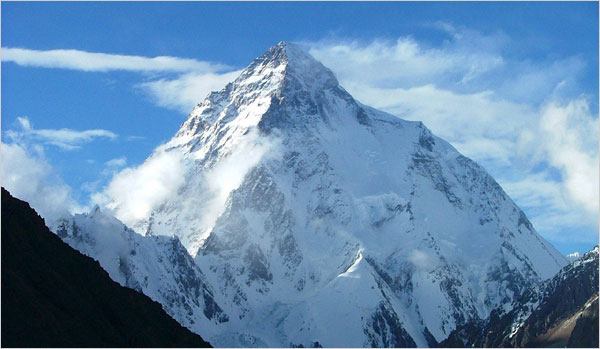 Update: Sad news is just starting to trickle in from K2. Very shortly after I posted the story below, I saw several foreign language reports coming through that Fredrik Ericsson has fallen on the mountain. Details remain a bit sketchy at the moment, but it appears that he has tragically lost his life trying to scale K2. I’ll post more as it becomes known.

Update 2: More information on the death of Fredrik Ericsson. It appears that he, Trey Cook and Gerlinde were all proceeding up towards the summit on schedule this morning, hoping that the weather would clear. At some point, Trey turned around, but Fredrik and Gerlinde continued onward.

As the climb unfolded, the whiteout conditions continued, and it seems that Fredrik fell while placing an anchor, sliding passed Gerlinde and plummeting 1000 meters to his death. Gerlinde immeditely down climbed, where she, and several other climbers, found Fredrik’s body in the snow. They obviously aborted their attempt to climb the mountain, and Gerlinde is now reportedly back in Camp 2, where a broken cable is preventing her from descending further for now. She plans to rest and then proceed down to BC later, when the cold of the evening solidifies the rock slides that have been prominent in recent days.

Original Post
There isn’t a whole lot of information coming out of the Karakorum today, but we have received word that most of the climbers have turned back on K2 due to high winds and very low visibility on the higher slopes of the mountain. The weather forecasts had predicted excellent conditions for the day, but that hasn’t materialized as expected.

The Field Touring Alpine Blog has been updated with the news that their leader, Fabrizio Zangrilli, is amongst the climbers who have turned around. Fabrizio is now in Camp 3 where he reports that visibility on the mountain is “near zero” which is making for very slow going, both up and down the mountain. Reportedly, he’ll now wait in C3 to assess the situation tomorrow, and see if there is a possibility of going for the summit one more time.

Meanwhile, ExWeb is reporting that no climbers on the Abruzzi Route reached Camp 4, although there are still some making the attempt along the Cesen Route, although most of them have returned to high camp as well. ExWeb does say that as of their last update, both Gerlinde Kaldenbrunner and Fredrik Ericsson were still hoping to summit, despite the conditions.

Lets keep our fingers crossed that both Gerlinde and Fredrik get down safe, especially if they do summit in those high winds and low visibility. Fredrik has been planning a ski descent of the mountain, which may not be the best thing to attempt if he can’t see very far ahead.