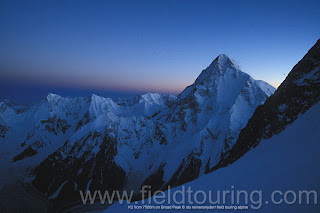 It has been a few days since we checked in on the action in the Karakorum, but really there hasn’t been much to report. Early last week a group of very strong climbers, including Fredrik Ericsson and Gerlinde Kaltenbrunner, were hoping to complete their summit bids, but high winds and extremely deep snow conspired to send them back down the mountain. Now, they all wait in Base Camp, hoping for an opportunity to give it one more try.

There haven’t been a lot of updates from the mountains in the past few days, although the Field Touring Alpine Blog was updated on Saturday with the news that another weather window is expected to open tomorrow and run through Friday, possibly granting access to the summit once again. The FTA team has remained patient after getting turned back on Broad Peak, and while some of their mates have had to go home, others, such as Meagan McGrath and Brian Block are still in BC and hoping to top out soon.

Both Fredrik and Gerlinde are keeping a close eye on the things as well, each hoping to get their shot at the mountain once again. In the case of Ericsson, he hopes to make a ski descent of the mountain, and has suffered much here in the past two years, losing a climbing partner to K2 last season.

As for Gerlinde, her story is well known by now. She’s been turned back by the “Savage Mountain” twice now, but she’s been hoping that third time is the charm. If she does top out, she’ll become just the third woman to claim all 8000-meter peaks, but the first to do so without the use of bottled oxygen.

Stay tuned for more updates in the next few days. We’ll see if anyone reaches the summit this year, but it’s beginning to look like we could have a repeat of 2009.