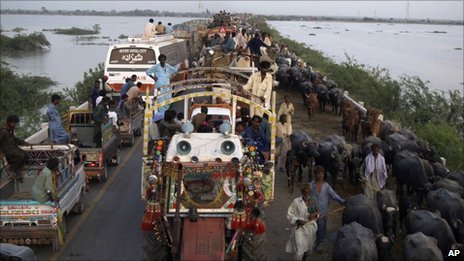 Explorers Web has a good post this afternoon reminding us that even though the Karakorum climbing season is over for the year, we shouldn’t forget about the people living in Pakistan who are continuing to suffer thanks to the ongoing flooding there. This year the monsoon has been especially bad, and the entire region, including Nepal, China, India, and others, has been inundated with rain, but Pakistan seems to be getting the worst of it, with current estimates saying that more than 17 million people have been affected by the floods, and the waters continue to rise.

According to this story from the BBC, more than 1.2 million homes have been destroyed, leaving 5 million people homeless at the moment, and while these immediate needs have to be addressed, the long term outlook is not good either. With nearly 8 million acres of farm land already under water the country could be facing a foot shortage in the weeks ahead, and with that much standing water, the threat of disease such as malaria, is on the rise too.

International aid is arriving in Pakistan, and aid workers are doing their best to get everything distributed properly, but as if they didn’t have enough to worry about, the Taliban has made threats against the workers as well. While these efforts will continue in the days ahead, many Pakistani’s are fleeing to the southern portion of the country to escape the devastating floods.

The Field Touring Alpine Blog posted a number of updates on the situation last week, and has recommended that the climbing community offer up any support they can to the flood victims. They also posted a link with a number of great organizations that are accepting donations and lending aid to the people of Pakistan as well. You can find that list by clicking here.

FTA operates several climbs in Pakistan each year, most recently sending teams to Broad Peak and K2, so applaud them for helping to spread the word about what is going on there. From the sound of most reports, this has been an incredibly crippling disaster that could take years to recover from. It has been a very trying couple of months in the central Asian country, lets hope that the Monsoon will now move on, and allow things to begin to get back to normal there.

4 thoughts on “Pakistan Needs Help From The Mountaineering Community”