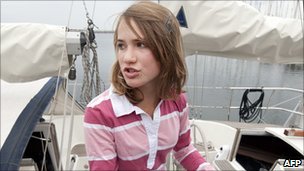 14-year old Laura Dekker set sail from the Harbor of Gibraltar this morning, finally beginning her attempt to sail solo around the world. She slipped out to sea early, and without much fanfare, avoiding media attention in order to get the voyage underway. She will now spend upwards of two years circumnavigating the globe in an attempt to become the youngest person to accomplish that feat.

Laura has been in the news for more than a year now. She first wanted to sail last year, at the age of the 13, but Dutch officials blocked her departure, while child protective services stepped in to ensure that she wasn’t able to slip off unknowingly. What followed was a series of court appearances, heated debate on both sides of the topic, and even an attempt to set sail after the teenager ran away to St. Maarten in the Caribbean. Three weeks ago, the Dutch courts made their final decision, granting Laura permission to sail after she demonstrated her skill level, sharpened up her first aid skills, and joined a distance learning program to continue her studies while at sea.

Unlike the recent solo sailing attempts by Australian Jessica Watson and American Abby Sunderland, Laura will not be making the the attempt non-stop. Instead, she’ll make planned trips into ports around the world. Also unlike those other two girls, she’ll have a support ship trailing her, staying close at hand in case of emergency. This gives her a safety net that Jess and Abby did not have.

Jessica garnered plenty of media attention this spring when she completed her solo circumnavigation attempt, sailing into Sydney Harbor three days shy of her 17th birthday. Meanwhile, Abby made news for other reasons when her ship was struck by a 30 foot wave during a storm in the Indian Ocean. The wave snapped her mast, and she was left adrift at sea until a rescue operation could be conducted a few days later.

Laura hopes to break Jessica’s record, and she has until September 20th, 2012 to do it. Her voyage will begin with a trip across the Atlantic, followed by passage through the Panama Canal into the Pacific. By doing this, she avoids the notoriously treacherous waters of Cape Horn at the southern tip of South America, something that both Jess and Abby had to face. She’ll also avoid the Cape of Good Hope in Africa, while traveling through the Suez Canal, and while this route helps to steer clear of some of the most dangerous waters on the planet, they also increase the amount of traffic she’ll have to deal with along the way.

For now, we’ll all have to wait and watch to see how she does. I wish her luck as she has finally gotten underway at long last.