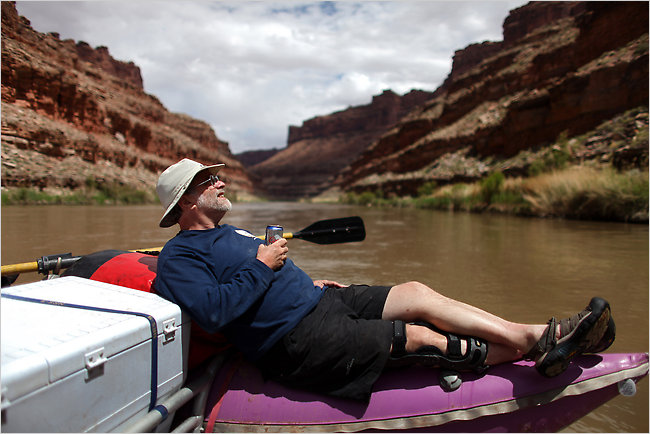 By now, many of you have probably read the story that appeared in the New York Times that took a look at the effects of technology on our ability to concentrate, and how going outside, and more specifically getting away from all the technology that has pervaded our life, helps us to clear our minds. In that story, a group of researchers who study the brain, took a trip through the Glen Canyon National Recreation Area in Utah, a place that offers no cell phone or Internet service, and completely devoid of technology, except for what you bring with you. Some of them were skeptics about the impact of technology on the way we think, while others though that tech overload could adversely effect our concentration. They discovered, that the quiet calm of the outdoors, away from those distractions, did indeed change their perspectives on a great deal of things.

Following up on that story, the Adventure Life published this piece in which site editor Steve Casamiro shares his thoughts on the subject, coming to the same conclusions that many of us already have. A healthy dose of Mother Nature goes a long way to helping keep us focused, happy, and mentally healthy. But he also notes how useful some technologies can be in the backcountry, such as GPS, satellite phones, and so on. Technology like the SPOT Messenger could potentially save our lives and iPods seem like a piece of gear we seldom leave home without these days. The question is, should we be taking all of this stuff and how does it effect our enjoyment of our time out in the woods?

This is a subject I’ve wrested with a bit myself in recent years. After all, I use a great deal of technology to write about doing things outdoors. I am decidedly a tech nerd. I love gadgets and gizmos, and I think of ways that I can keep them well charged while on an extended trip away from civilization. But that said, I usually leave my cell phone behind and I’m quite content with unplugging from the Internet for awhile. That said, having my iPod along as been useful in a number of situations and a GPS is a tool that holds a lot of a value as well. They’ll both probably continue to find a place in my pack.

Like all good things, technology should be used in moderation. It can be very distracting, even at the best of times, and these days we’re often multitasking on our laptops, while texting friends and Twittering our every move. All the while, music, television, or both, drone on in the background. I head outside to get away from some of that, and it’s important to remind ourselves of that very thing from time to time. After all, if you’re reading this blog, you more than likely have a love for the outdoors, and it is would be a shame to miss a spectacular sunset or a rare creature on the trail just because we’re too busy picking out the next song on our iPods.

5 thoughts on “Technology and the Outdoors”