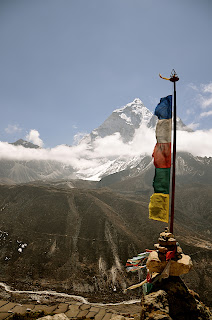 A few days back, Eric Larsen reached Base Camp on the South Side of Mt. Everest as he continues his pursuit of the “Three Poles” in a single calendar year. Reaching that point was a bit of a milestone for the team, as they had been making slow progress up the Khumbu Valley thanks to very wet conditions. Reaching BC allowed Eric to send out a video dispatch, which can be found below, in which he gives us a look at the surrounding mountains and the Puja ceremony in which all climbers are blessed by Buddhist monks before they start up the mountain.

With the Puja out of the way, Eric and the rest of the climbers can begin the acclimatization process and move further up the mountain. Yesterday, he crossed the Icefall for the first time and made his way up to Camp 1, shuttling gear for the weeks ahead. The climb took about five hours, but they didn’t spend the night, electing instead to return to BC. They’ll be spending plenty of nights at altitude soon however, as there is a lot of work to be done.

For Eric, Everest is the third and final “Pole” to reach to become the first person to reach the North and South Pole, as well as the summit of the world’s highest peak, all in the same year. His Save The Poles Expedition is meant to raise awareness of the impact of global climate change on these remote environments. Transitioning from polar expeditions to a mountaineering one has to be a bit of a change for him, as on the trips to Poles, he is constantly on the go, while here he’ll have some down time in BC to rest and recuperate. Then again, the challenges of the altitude will be a new thing to deal with as well.