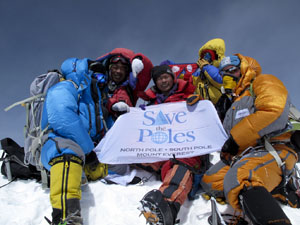 There was a lot of news from the adventure community while I was mostly out of contact last week. I’m regrouping and getting back to my schedule now, so expect the usual updates to resume. Bear with me while I work to get everything sorted out and report what’s happening!

Of course the big story last week, which I did find time to post updates on, was Eric Larsen’s successful completion of the Save the Poles Expedition. Eric reached the summit of Everest, which brought to an end his amazing journey that began last November when he set out for the South Pole. He would reach that point in early January of this year and then later went on to the North Pole in April. That left just Everest, which is sometimes called the “Third Pole” on his to do list for 2010. Last week he checked the mountain off his list as well, as he and his Sherpa guides became the only team to reach the top during the fall season. By doing so, Eric became the first person to visit all three poles in a single calendar year. Pretty impressive to say the least.

Eric has been posting updates on his blog, including the story of his successful summit bid. As of yesterday, he was making his way back down the Khumbu Valley and had reached the town of Pheriche. That means he’s likely to be into Namche Bazaar today, and back in Kathmandu by Thursday or Friday, depending on weather and flights. I’m sure he’s enjoying the walk back down, but it has to be a bit bittersweet as well. Again, congratulations to Eric on accomplishing his mission.

While Everest may have fallen silent until the spring, its neighbor, Lhotse, still has a few climbers attempting the summit, including Marty Schmidt who set off on a solo summit push on Sunday with the hopes of topping out tomorrow, weather permitting. If successful, this will be Marty’s fourth 8000 meter peak this year having already knocked off Makalu and both the Gasherbrums earlier.

ExWeb posted an update yesterday with news on a host of summits across the Himalaya, including news from Shisha Pangma, Manaslu, Ama Dablam and more. It seems that the season is rapidly coming to a close, and it has been a bit of a mixed bag. Weather hounded teams on all of the big peaks, but that didn’t stop some of the more adventurous climbers from reaching their goals. Now, we’ll start to look toward the spring, when the region will get very busy once again.