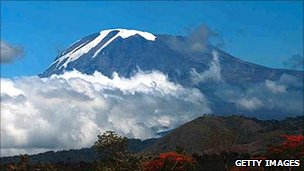 According to the BBC, a new study found that nearly half of the climbers on Kilimanjaro suffered from altitude sickness, demonstrating just how dangerous a trek up the highest mountain in Africa can be. Traffic on the peak has increased in recent months thanks to a few high profile celebrity climbs, which has led to even more travelers on Kili’s trails, many of which are unprepared for the challenge.

Researchers camped at 4730m (15,518 feet) on the mountain for three weeks, while conducting studies of the condition of the trekkers. They used the Lake Louise consensus scoring system, which records common altitude sickness symptoms such as headache, sickness and fatigue, and as a result they found that 47% of all the climbers tested exhibited some signs of distress, including headaches, vomiting, loss of coordination, and problems sleeping.

Even more interesting, the study says that the effects can begin to set in as low as 2500m (8,202 feet), with 75% of all people who go above 3000m (9,842 feet) having mild symptoms. Further research indicated that neither anti-altitude drusgs nor rest days seemed to have a major impact on whether or not someone became ill. The route taken to the summit had no real effect either, although acclimatizing on another near-by peak did work as an effective measure for preparing for the climb.

I can say first hand that altitude sickness can be a real problem on Kili. You’ll hear plenty of people tell you that if you’re in reasonably good shape, you’ll have no problems, but when I went, there were plenty of people suffering. One group reported that nearly all of them had gotten physically ill, and they were dealing with tremendously bad headaches. While I didn’t have those issues, I did have an awful time trying to sleep, which is not a fun feeling after some very long days of hiking. My advice is to rest well before beginning the hike, and go slowly (Pole, pole!) while on the mountain.

1 thought on “Study Finds That Altitude Sickness Common on Kilimanjaro”