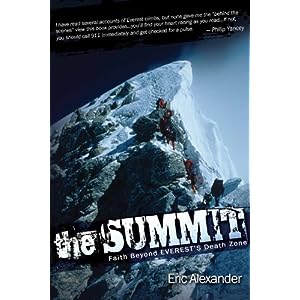 Climbing Mt. Everest, or any other big peak, is always fraught with perils. You have to deal with altitude and technical challenges. You’ll have to acclimatize and plan your ascent carefully, and spend months preparing for an opportunity to reach the top that may never come, often due to circumstances beyond your control. How a climber deals with those challenges and adversities varies with each individual. For climber,  professional mountain guide, and author Eric Alexander, it is his religious faith that helps see him through those challenges.

That is the core premise behind Alexander’s new book The Summit, which hits bookstores soon. The book is his opportunity to share not only his adventures in the mountains, but also how his faith in God served him well on those expeditions. In fact, those journeys actually helped to strengthen that faith and give him further insights into his beliefs.

On its surface, Alexander’s story is a typical tale of adventure in the mountains. In the book he shares stories of his climbs on Ama Dablam, Kilimanjaro, Elbrus, Everest, and more. Those tales include near death experiences, crushing disappointments, spectacular triumphs. and moments of self discovery, aind in the author’s case, moments of clarity about his faith.

The book begins with Alexander meeting and befriending Erik Weihenmayer, an experienced climber who also happens to be blind. The two men discovered that they were kindred spirits and soon they were climbing together all over the world. Their friendship would lead to the two of them going up Everest together, with Alexander serving as guide as Weihemayer climbed into history, becoming the first blind man to reach the summit of the tallest mountain on the planet. But the two climbers would go on to have even more adventures together.

For most arm chair mountaineers, Weihenmayer’s story is well known, but in this case it is told from a different perspective, that of his guide, who helped him through some of his most challenging climbs. But Alexander also helped other physically challenged adventurers reach their goal, such as taking four blind teens to the top of Kilimanjaro and taking three “at risk” kids to the top of Mt. Pisco. Often times, Eric suffered and struggled himself to ensure that the people that he was guiding succeeded in their mission.

While The Summit does offer some interesting insights into the various climbs, I personally found little new in the book. If you’ve already read some of the more well known mountaineering books, you probably won’t feel that you’ve garnered much new out of this book. The most interesting story for me personally was the climb up Everest with blind mountaineer Weihenmayer, but you’ll likely find his own book, Touch the Top of the World, a better read. Don’t get me wrong, The Summit isn’t a terrible book, although I did find the writing to be a bit uneven at times.

Perhaps part of my issue with the book was Alexander’s focus on his faith. Now, admittedly, that is one of the central messages of the book and at the core of the story that the author is telling. While I am personally not a religious person, I do have a spiritual side, and a healthy respect for other people’s religious beliefs. That is why when Alexander refuses to take part in in certain cultural rituals in Nepal, such as spinning prayer wheels, on the basis that they are essentially pagan rituals, I couldn’t help but feel a bit of a disconnect. While I respect Eric’s religious views, I couldn’t relate to the way he saw some of the beliefs of others.

That aside, The Summit is a solid entry into the mountaineering book club. For armchair mountaineers who are looking for something new to read, the book will keep you entertained, and if you’re a Christian who takes their faith very seriously, the religious aspects will appeal as well. If you’re new to the genere however, there are plenty of other books I’d recommend ahead of this one.