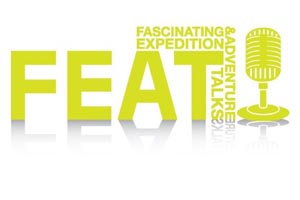 Back in October I told you about an event that took place in Johannesburg, South Africa called FEAT, which stands for Fascinating Expedition and Adventure Talks. Billed as the “Ultimate Armchair Adventure Experience,” FEAT was a mix of TED Talks and the Banff Film Festival, with some of South Africa’s top adventurers on hand to share their experiences in a unique format that gave them just seven minutes each to share a unique message about their travels.

It turns out that FEAT was such a success that it’s now hitting the road for Cape Town and bringing all the fun and adventure with it. FEAT CT, as it is being called, will take place on February 12, 2011 at the Artscape Theatre on the Foreshore, with tickets going on sale tomorrow from Computicket.

For the Cape Town version of FEAT, director Lisa De Speville has put together an entirely different group of adventurers to speak. Amongst those scheduled to appear are ocean rower Peter van Kets and ultrarunner Braam Malherbe, as well as adventurer Howard Fairbanks, who recently made a 42-day trek to the North Pole.

Want an idea of what to expect at the event? Check out the clip below of mountaineer Mandy Ramsden from the Jo’Berg edition of FEAT. Mandy is the first African woman to complete the Seven Summits, and topped out on Everest this past spring. In the clip, she talks about her experiences on that mountain.