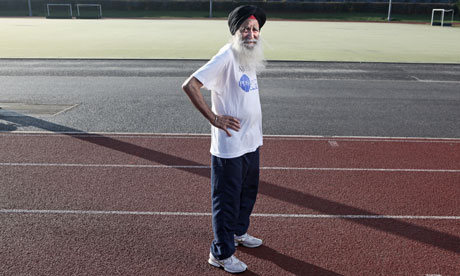 U.K. newspaper The Guardian ran a profile of runner Ajit Singh a few weeks back that should prove inspirational for runners of all ages and dispel the old myth that you may be too old to work out. The 80-year old Singh has been running since he was a child, going five miles to and from school each day. He stuck with the practice as he got older however, and even began competing in long distance runs after he turned 40. He would continue to compete for another 35 years!

Singh’s running resume is pretty impressive. He’s run the London Marathon 20 times and averaged roughly 2000 miles a year over the 35 years he was competing. That puts him at more than 70,000 miles for his lifetime, which is enough to circumnavigate the planet. Three times! At the age of 80, he still runs three times a week, covering about 5km each time.

The runner, who grew up in Punjab, India but now calls the U.K. home, is also part of a running group called the Sikhs in the City that was started about 10 years ago. The group is full of older runners, their founder is now 99, and when they recently competed in a relay race in Edinburgh, where their combined ages was 340 years.

Singh has this advice for those starting to run:

“Mental motivation is vital. You need to eat a simple diet in moderation, and you need to train regularly. Consistency is crucial. If you decide to start running, you need to stick at it. If you’re patient, it will be extremely rewarding.”

Seems like great advice to me. This guy is kind of my hero. I hope when I reach his age I’m still running and covering as much territory. It is a great way to stay healthy and fit, although getting over the initial hurdle of getting started can be a bit daunting. Stick with it though, and you’ll not only learn to love it, you’ll find good health for many years.

Now if you’ll excuse me, I need to go buy a new pair of running shoes. Again!

Thanks to Jorge Brake for sharing this cool story.