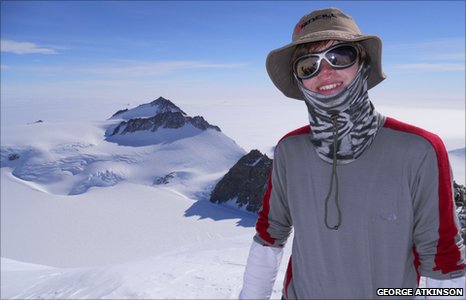 16-year old Brit George Atkinson is preparing to go to Everest this spring where a successful summit will earn him a spot in the record books. George is hoping to become the youngest person to climb the Seven Summits, and the 8850 meter (29,029 ft) Everest is all that stand between him and that goal.

According to this story from the BBC, Atkinson just finished up his climb of Vinson in Antarctica, and if he conquers Everest before the 29th of May, a likely scenario if he does reach the summit at all, he’ll be the first person to complete the Seven Summits, the highest peaks on each of the seven continents, before the age of 17.

Of course, this all brings into focus, once again, the debate about the age of climbers on Everest. Last year, after Jordan Romero climbed the mountain at the age of 13, both China and Nepal instituted age limitations for taking on the tallest peak in the world. The Chinese set the limit at 18, but said they would consider going as low as 16 if circumstances dictated. In Nepal, the age limit was set at 16 as well, which means George has his choice of which side he’d like to climb from, although Nepal’s South Side seems the most likely location.

Atkinson turns 17 on May 29th, so he’ll likely be just shy of his birthday when he goes to the top. His record will probably relatively short lived however, as Romero is scheduled to go to Antarctica in November, where he’ll probably finish off his Seven Summits by topping out on Vinson. He’ll be 15 at that time.

Thanks to my friend Alan Curr for sending this story my way.