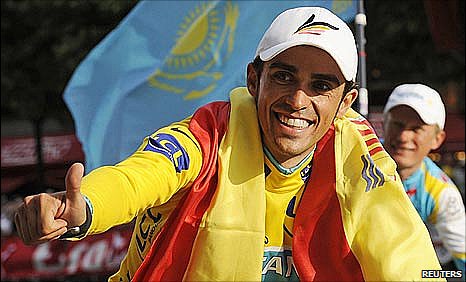 In other cycling news, doping charges against Alberto Contador have been dropped and he is now free to race in the Tour of Algarve which began today. His one year ban from the sport is lifted and he’ll continue to be regarded as the 2010 Tour de France winner as well.

As you no doubt recall, Contador tested positive for the banned substance clenbuterol while riding in the the Tour last year. He claimed that he picked up the trace amounts from eating tainted meat. The drug is sometimes used, illegally, in bulking up cattle before they are sold to stock houses. The meat in question was brought to France, from Spain, by a team chef on one of the rest days last year.
The Royal Spanish Cycling Federation investigated the positive test and issued the ban a few weeks back, allowing Contador time to respond to the ruling and present evidence of his innocence. At the time of the initial ban, the RSCF said they felt that Contador might indeed have taken the substance accidentally, but they had to ban him none the less. It is unclear if the rider presented such evidence or if the RSCF simply elected to reverse their decision.
Contador isn’t completely out of the woods yet, as the International Cycling Union (UCI) and the World Anti-Doping Agency could still challenge the decision. The UCI says they’ll take up to 30 days to review the case and ask for a ban on an appeal.
For his part, Contador has always maintained his innocence and says he is relieved to have this all behind him so he can get on with racing. But fans of the sport aren’t necessarily in his corner. According to this story at VeloNews, while Alberto is getting plenty of support in his home country of Spain, officials in other countries are dismayed by the ruling, calling in unprecedented and wondering as to the cause of the sudden change in direction. Speculation is that there was pressure on the RSCF to change their ruling to protect a popular athlete in their country and that Contador received special treatment for what would otherwise have meant an automatic ban from the sport.
Something tells me we haven’t heard the last of this, but for now, Contador will ride.