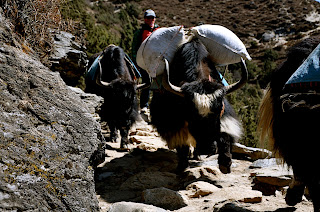 It hardly seems possible that we’re on the verge of another Everest climbing season, but a month from now the climbers will be hurriedly putting the final touches on their preparations before setting off to the Himalaya. One of those climbers will be Alan Arnette, who is already preparing for his own attempt on the mountain and has shared some pre-season information with us on his latest blog post.

First off, Alan reports that he has heard from the good folks at Everest ER, who will once again be setting up their medical facilities in Base Camp on Everest’s South Side. Organized and run by Dr. Luanne Freer, Everest ER provides all kinds of medical services for the climbers who can suffer a number of ailments while on the mountain. Most are fairly minor in nature, but obviously there can be some very serious health related issues when you’re dealing with altitude. Dr. Freer noted that the group would once again be accepting $100 donations from each non-Nepali climber to help offset costs, and she also noted that there will be a third doctor in the camp this year, extending their capabilities even further.

Alan also posted a note on the success rate of climbing Everest and noted that the Russell Brice, who operates the Himalayan Experience guide service recently posted his company’s numbers. Himex offers guided expeditions on Everest and a number of other big peaks, and Brice has years of experience in the business as one of the top services in the region. So how did Himex perform? From 2001-2010 the company has a 74% success rate of their clients, guides, and Sherpas. If you factor clients alone, that average is at 70%, which is a pretty respectable number all things considered.

Finally, Alan writes about the potential changes, or lack there of, in the way communications are handled on Everest. Back in October, we were all excited by the news that 3G cell towers were now in place near Base Camp which would allow the climbers and trekkers to make and receive phone calls, texts, and even use data while on the mountain. Turns out that while service is there, most will still need to use a satellite phone for reliable communications back to the world. Alan cites this article from ExWeb which received word directly from the cell company that service only extends up to 5600 meters (18,372 ft), which is slightly above BC. Those heading up to Camp 1 or higher will still want to bring their traditional comms equipment with them.

That’s all for now, but as usual, you can expect a major upswing in the amount of Everest news as we inch closer to the spring. It won’t be long now until the streets of Kathmandu are even more crowded with trekkers and climbers, and another season will begin in full force. I can’t wait!