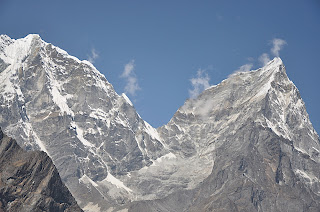 Anyone who has read my blog for any length of time knows that I’m a big fan of the video podcast The Rest of Everest. Over the past few years, no other outlet has given us more information on what it takes to trek and climb around the world’s tallest peak, and the show has brought its fans endless insights into not only high altitude climbing, but also the culture and history of both Nepal and Tibet, the two countries on which Everest sits.

The show has been on a bit of a hiatus since it ended the last “season” which was focused on the trek to Everest Base Camp on the South Side of the mountain. But a new season was launched in a big way yesterday, when a new episode of the podcast hit the web in a big way. While the show has always been special to me, this new episode happens to have been filmed in 3D, which gives us it a new dimension (pun fully intended!) in its coverage of the mountain.

In order to watch the episode in 3D you’ll need a pair of the traditional red and blue “anaglyph” glasses, which unfortunately I don’t own, so I can’t comment on good the 3D effect is and how everything looks. But if the quality is up to the usual ROE standards, I suspect that it looks quite nice and really adds something to the show.

If you watch the video without the glasses it is likely to give you a splitting headache, but if you jump ahead to the middle of the show, the entire episode is re-aired in plain old boring 2D. That will save you a lot of eye strain and still allow you to enjoy the episode, which kicks off the fifth season of the Rest of Everest. This episode serves as a bit of an introduction to the mountain’s seldom visited East Side, also known as the The Kangshung Face.

Get your Rest of Everest fix, either in 2D or 3D, by clicking here. Glad to have you back Jon!