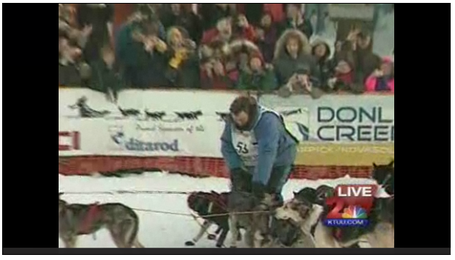 The 2011 Iditarod has its winner! Experienced musher John Baker became the first person to finish the 1131 mile route, arriving in Nome this morning. Baker claims his first ever Iditarod championship, and he did so in epic fashion, completing the course in record time. It took Baker just 8 days, 18 hours to finish the race, besting the old record, held by Martin Buser, by two hours.

The only other musher who has crossed through the checkpoint at Safety is Ramey Smyth. He is now on the stretch run to Nome, where he’ll easily claim second place. Behind him, currently running in third is Hans Gatt, followed by Dallas Seavey and Hugh Neff, all of whom are through White Mountain, which means they have less than 77 miles to go until they reach the finish line.

Other mushers of note include Deedee Jonrowe, who is in tenth place coming down the stretch and Lance Mackey who is running in 16th place. Baker’s win snaps Mackey’s run of four straight Iditarod titles, which as been an impressive run over the past few years.

While a winner has been crowned, the race will continue over the next few days as more teams arrive on Front Street in Nome. The front runners will all stagger in over the next few hours and into this evening, but the back-of-the-pack racers are still hundreds of miles away from Nome. The Last Great Race, as it is known, is an outstanding test of endurance and skill, and just finishing is an accomplishment. Lets hope the rest of the teams get the chance to do just that, and come home safe and sound.

Congrats to John Baker on the very impressive win!