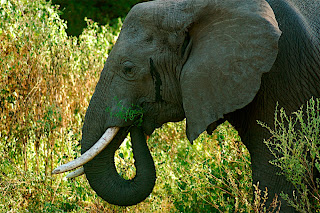 A few weeks back I wrote about the Elephant Ivory Project, which is sending explorers Trip Jennings and Andy Masar deep into the African bush in the Democratic Republic of Congo to track elephants. The duo is hoping to collect dung from five distinct herds of the animals in the hopes that they can create a “DNA Map” of the region which can then be used to track the illegal ivory trade. The eventual goal of the expedition is to raise awareness of the illegal poaching of elephants and hopefully bring an end to the practice altogether.

When I wrote about the expedition the first time, Trip and Andy were just preparing to leave for the DRC. Now, more than a week and a half later, they are on the ground there and preparing to strike out into the wilderness. But, as their recent journal update indicates, there are more challenges to the project than just impenetrable wilderness and wild animals.

Trip and Andy are hoping to journey into a forest that is designated as TL2. Unfortunately, those plans have had to be put on the back burner for now, as a notorious criminal and poacher by the name of Colonel Toms has moved into the region with a group of bandits, and it currently not safe to operate there. Toms recently escaped from prison where he was serving a 20 year sentence for crimes against humanity, and has immediately gone back to his old ways, setting up shop in TL2. His illegal poaching efforts are used to finance the purchase of weapons for his band.

Jennings and Masar aren’t giving up however, as TL2 can provide some very important data for their research. The forest sits right between Salongo National Park and Virunga National Park, which sit 600 miles apart, which means that TL2 could conceivably provide genetic information on elephant herds spread out across the entire country. The promise of that information has put Trip and Andy on a plane to Kisangani where they hope to gain access to the TL2 forest, while avoiding Colonel Toms’ band of merry men.

The field update from the expedition team puts into light just how dangerous Africa can be at times. They are traveling into some truly remote wilderness area where there is practically no law at all. Poachers are out to get the animals of course, but they certainly don’t have any qualms about making a few explorers disappear too. Lets hope that Andy and Trip remain safe as the venture into the jungles.

2 thoughts on “Elephant Ivory Project Update: On The Ground In The DRC”