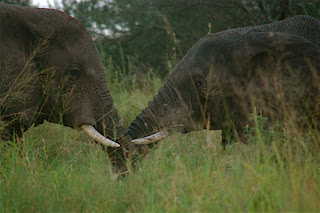 The past couple of weeks I’ve written a few posts about the Elephant Ivory Project, which is an expedition that is going on right now in the Democratic Republic of Congo. Explorers Trip Jennings and Andy Maser are on the ground in that country, and are preparing to gather elephant scat in hopes of creating a DNA map of the region that can be used to trace the illegal Ivory trade back to its origins. The team behind this expedition hopes to put an end to those activities once and for all.

Last week when we checked in with Trip and Andy they were preparing to travel into a forest that is simply designated as TL2. That forest sits right between two major national parks where diverse elephant herds roam, and the thought was that by gathering samples from TL2, they could get a diverse set of data to help more accurately plot their DNA map of the DRC’s elephant population. There were some challenges to that plan however, as the region is also home to a notorious criminal by the name of Colonel Toms, who recently broke out of a prison there and has resumed poaching wild game as a way of earning money to pay for arms. Undaunted, Jennings and Masar set off with Terese and John Hart, two researchers that know the area well, in hopes of moving ahead with the project.

In a journal entry posted to the expedition’s website yesterday, Jennings gives us an update on their progress. The team arrived at the city of Kisangani, which sits at the heart of the jungle. The city is in the midst of a cholera outbreak that has left 27 people dead and another 200 infected. Needless to say, that hasn’t made it one of Trip and Andy’s favorite destinations thus far. Fortunately, there stay will be short, as they hoped to leave the city today for the town of Kindu, which sits right on the edge of the TL2 forest. From there, they’ll plunge deep into the jungle on motorcycles where they’ll begin the expedition in ernest by tracking elephants and collecting their dung.

Over the next two weeks they plan to set up camp in the remote research station of Obenge, a place that is so remote that even the poachers don’t bother to go there. Andy and Trip hope to take samples from 30 distinct elephant herds in an area that falls on the banks of the Lomami River.

This being Africa, the wilderness and wild animals aren’t the only dangers to their travels. The journal entry also notes that a poacher by the name of Moses has been operating in the area and has actually been burning crosses in the yards of people who support the creation of the Lomami National Park, a proposed reserve that will protect 25,000 square miles of forests. The DRC government is expected to pass legislation creating the park this year, and if that happens, it’ll put a crimp into the poacher’s activity in the region. Moses doesn’t like that much and has been going around attempting to intimidate people. It seems he’ll be getting a visit from the Congolese military in the next few days to politely ask him to stop.

For Trip and Andy, the real adventure is just about to begin. They’re in the jungles now and pursuing their goals of collecting DNA samples from the elephant herds, but they have a lot of work ahead of them, and there are plenty of people who do’t want to see them succeed. Expect another update on their progress next week, and keep in mind that few things ever go as planned in Africa.