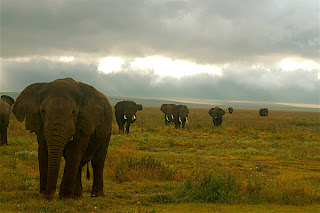 Explorers Trip Jennings and Andy Maser are preparing to set out on a very important expedition to the Democratic Republic of the Congo. One that have been in the planning stages for more than two years, and is finally becoming a reality. The expedition is scheduled to last approximately five weeks and could make all the difference when it comes to saving a very important species on the African continent.

On Sunday, Trip and Andy will leave for the Congo where they will begin the Elephant Ivory Project, during which they’ll be traveling on foot through the bush collecting elephant scat samples from five distinct herds. Those samples will be used to help build a DNA map of the elephants in the region, with that map being used to pinpoint which herds are being targeted by illegal poachers. From there, they hope to be able to trace the illegal trade routes of those poachers in an effort to close them off for good.

The project is funded, at least in part, by two grants from National Geographic, and the team is hoping to produce a documentary about their efforts upon their return. Through those efforts, they hope to raise awareness about the illegal ivory trade amongst the general public, and shut it down once and for all.

I can tell you that from my recent trip to South Africa that illegal poaching is a big deal there as well. Both elephants and rhinos are under attack in Kruger National Park, and the locals that I spoke to said that it was a growing problem. Demand for the ivory from elephants tusks and for the horn of rhinos is in high demand in parts of Asia, and to a lesser extent here in the States, and because of this, poachers are willing to do what ever is necessary to get their prize. it is a serious issue that if left unchecked could see the complete eradication of the species in Africa.

Also while on that trip to South Africa I had the chance to encounter and observe elephants on a number of occasions, often in very close proximity. They are an amazing animal and fascinating to watch. They have a clearly defined familial unit, care for their young much like humans, and are extremely expressive and intelligent. The thought of them being slaughtered for their tusks in the 21st century is very disheartening. Hopefully this expedition can begin to turn that tide to some degree.

Stay tuned for updates on the progress of Trip and Andy. Good luck guys!