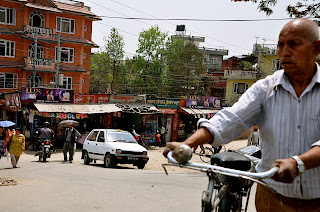 As I mentioned yesterday, the 2011 Himalaya season is starting to ramp up quickly with climbers and guides arriving in Kathmandu and putting the final touches on their preparations for the climbs ahead. One of those climbers is Alan Arnette, who will no doubt be posting regular updates throughout his expedition to climb Everest as part of his Seven Summits for Alzheimer’s campaign. Alan posted another update from Kathmandu today, offering more insights into what is happening there and what we can expect in the weeks ahead.

Aside from setting the scene about how noisy and chaotic Kathmandu can be this time of year, or any time of year for that matter, Alan says that the weather in the region has improved, which means flights will resume to Lukla today. That’s important for the climbers heading to the Khumbu region, in particular those going to Everest, Lhotse, Ama Dablam, and other peaks in that area. The IMG team that Alan is climbing with is scheduled to leave for Lukla on Thursday, when they’ll also begin their trek to Base Camp. Other teams were already hoping to get out of KTM yesterday, so expected a bottleneck of travelers over the next few days, as everyone struggles to get out on the trail.

Alan also noted that he bumped into Russell Brice, owner of Himalayan Experience, better known as Himex, in the lobby of his hotel, and also had lunch with Phil Crampton of the Altitude Junkies. Both indicated that the number of climbers on Everest could be down as much as 25% this year thanks to the ongoing issues with the global economy and a rise in prices to climb the mountain. Back in 2009, there were more than 500 people who reached the summit of Everest, but it seems that this year we won’t even come close to those kinds of numbers. That’s probably a good thing, as it will reduce the crowds on Summit Day and may make for a safer climb in general.

Over the next week or so, most of the teams will be consumed with getting out of Kathmandu and making the trek to Base Camp. While that trek is a walk in the park compared to what lies ahead for them, it is still an important part of the acclimatization process that will prepare them to go higher on the mountain. It is also quite a great hike with some amazing views. On the North Side of Everest, in Tibet, the climbers will actually drive to BC. It isn’t the same experience, and they deal with the acclimatization a bit differently, but there will be teams headed that direction soon too.