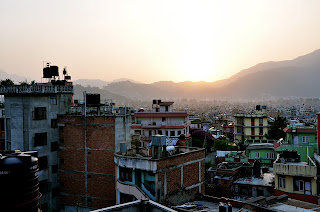 It is hard to believe, but another Himalayan spring climbing season is already upon us. While it’ll be a few weeks before the real work begins on the various mountains, the climbers are now arriving, along with truckloads of gear, in Kathmandu. Most will spend a few days there sorting out their equipment and organizing flights to their ultimate destination, where the acclimatization process can begin in ernest.

For those heading to Everest’s South Side and its neighbor Lhotse, that process starts with a flight to Lukla, where they’ll make the trek up the Khumbu Valley. Those heading to the North Side will actually fly to Tibet and drive to Base Camp on that side of the mountain. After a day or two of rest in BC, they’ll start working their way up the mountain, building their various camps and gear caches, with an eye on making a summit bid sometime around mid-May or so, depending on the weather.

Our friend Alan Arnette set off for Kathmandu this weekend and has already made his first dispatch from that city. Alan talks about the all too familiar sights, sounds, and smells of Nepal’s capital, and since this is the eight time he has visited that place, he is getting to know it well. Regular readers will know that Alan will be attempting Everest again this year. The mountain his the third of his Seven Summits for Alzheimer’s project during which he is hoping to raise $1 million for the Cure Alzheimer’s Fund.

Alan is climbing as part of the IMG team this year, and he reports that the news from the Khumbu is that the region above Namche Bazaar has plenty of cold, wet, heavy snow at the moment. He also reports, not surprisingly, that the weather has forced the cancellation of flights into Lukla today. Travel to the Khumbu is always a bit spotty at the start of the season, which is another reason the climbers end up staying in Kathmandu for a few days.

Also in Kathmandu is Dave Hahn, one of the guides for RMI Expeditions. Dave sent a dispatch to the National Geographic Adventure Blog with some details on his team, which will include Bill and Sara McGahan, a father-daughter team who hope to summit Everest together. Sara is just 16, which makes her one of the youngest climbers on the mountain, just slipping in under the new age requirement rules. Dave hoped to catch a very early morning flight to Lukla, but they’re likely still in Kathmandu thanks to the weather. With the quick turn around out of the capital however, it seems that Dave wants to get to BC quickly and establish the campsite. Look for the RMI team to be trekking the Khumbu in the next few days.

It is going to be an interesting year on Everest and throughout the Himalaya in general. There are mostly only big commercial teams this year and fewer independent climbers. That should make it easier to determine what is going on, but may also make it a “by the numbers” kind of season as well.

Reading the reports from Kathmandu reminds me that last year this time I was only a few weeks away from making my trip to the Himalaya. KTM is a colorful and chaotic place with lots of things to see and do, but it also suffers from rolling blackouts, dirty air and water, and noise at all times of the day and night. It is a wild place to say the least, and while I enjoyed my stay there, I was anxious to get out to the mountains. I’m guessing that most of the teams are feeling like that at the moment as well.