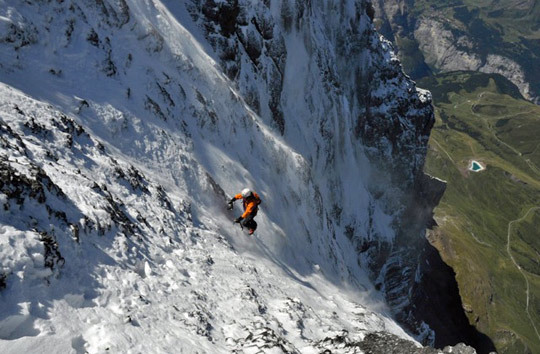 A couple of weeks back I posted about a fascinating set of articles that had been published at Alpinist.com. Dubbed the “Speed Series” the stories were a set of interviews with some of the top speed climbers on the planet, including Alex Honnold, Sean Leary, and Dean Potter. Since then, there have been two more additions to the Speed Series, putting Ueli Steck and Hans Florine under the microscope.

Part III of the series is with Steck, who, for my money, just might be the strongest climber on the planet. Ueli has set speed records on the Eiger that are simply unbelievable, knocking off that beast in just 2 hours, 47 minutes, 33 seconds. In the interview, Steck talks about what got him started in speed climbing (he began on the Eiger!), how he improved his times on that iconic mountain, and his general approach to the “lifestyle” of climbing. It is an insightful and interesting read about what makes one of the top climbers of this generation tick.

The focus of Part IV is Hans Florine, who has held a number of speed records in Yosemite, including what was once the fastest time up The Nose on El Cap. Hans discusses why he loves climbing in Yosemite Valley, what draws him to speed climbing, and how he got started. (Hint: They were just trying to squeeze in as many climbs as the could!) He also touches on alpine climbing vs. speed climbing, as well has his philosophy on the sport, amongst other things.

I’m not sure if Alpinist has any more interviews such as these planned for the weeks ahead, but I’ve found them to be excellent to read. Writer Gwen Cameron has done a great job in rounding up some of the best climbers around and allowed us to get inside their heads and see what drives them. Hopefully this will be a regular series for some time.