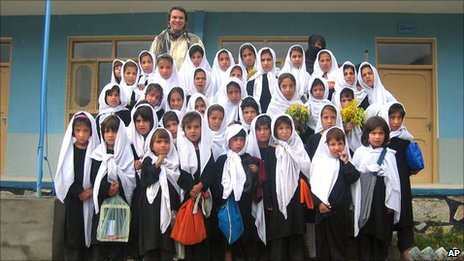 A few days back I posted a story about a damning report from 60 Minutes on Three Cups of Tea author Greg Mortenson. The CBS investigative reporting program alleged that Mortenson took, shall we say generous liberties with his own story, which has sold millions of copies and inspired people across the globe. They also contend that Mortenson’s charity organization, the Central Asia Institute, which builds schools and other facilities in Pakistan and Afghanistan, is woefully mismanaged and taking claim for things that it hasn’t done. (Watch the entire 60 Minutes clip here)

Now, the BBC has looked into the affair and is trying to get to the bottom of the story themselves. They posted this story yesterday which takes a look at the work of Mortenson and the CAI from the perspective of the people living in the regions that he is trying to help. Unsurprisingly, what they found was a bit of a mixed bag as well.

First of all, the BBC story side-steps any controversy surrounding Mortenson’s personal tales and doesn’t even touch on the allegations that he has fabricated significant portions about his past. Instead, it goes straight to Pakistan and Afghanistan to discover what the people there think about him and the CAI. The message that they received is that Mortenson has done a lot of great work in the Himalaya, and that CAI may have helped fund and build even more schools than it takes credit for on its website. The people living in the villages where the organization has helped fun projects, seem extremely grateful for the help that they have received, with many crediting Mortenson himself.

But once again, there are also charges of mismanagement and deceit, with some officials, particularly in Afghanistan, saying that CAI hasn’t done much of the things they say they have. Some of those comments come off a bit like sour grapes however, as it seems that the organization has sometimes operated without direct supervision from local leaders, which has put them at odds at times. Still, it is clear that Mortenson and his non-profit are not universally lauded even in the countries that he is trying to help.

The BBC story doesn’t really shed much new light on the topic, although it was good to be able to read the perspective of Pakistanis and Afghanis whose lives CAI’s work has had a direct impact on. 60 Minutes couldn’t have done a better job of having those elements in their piece as well.

As I said in the original piece I wrote a few days back, clearly Mortenson and CAI have done some great things in the Himalaya. Even if he had only built one school, that is more than what most people have done to help the people there. CAI has in fact built dozens of schools and helped fund and manage even more. That doesn’t mean that there hasn’t been mismanagement of the program or that they shouldn’t be more transparent with their operations out of respect for the donors however. And why Mortenson would feel the need to embellish his stories remains a mystery as well. He should be proud of the great things that he has accomplished and that ought to be enough.

Thanks to reader Dennis Large for sending me a link to this story. It is much appreciated and I’m happy to see another side of what CAI and Mortenson have done in Pakistan and Afghanistan.