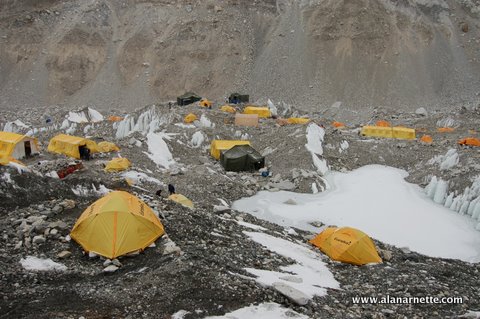 Over the weekend most of the climbing teams arrived in Everest Base Camp on the South Side of the mountain. Most enjoyed a bit of down time upon arrival, giving their bodies a chance to rest and become accustomed to the altitude. BC is located at about 5364 meters (17,600 ft), which is an impressive altitude for non-climbers, but just the tip of the iceberg for those hoping to go up Everest.

As I mentioned last Friday, the route through the Khumbu Icefall has been completed, but the ropes weren’t fixed up to Camp 1 until yesterday. That means that a number of teams will likely begin their acclimatization process today, with the first treks up the mountain to deliver gear and supplies to C1. The Peak Freaks, for instance, are one of the groups who are hoping to go up the mountain today.

The IMG crew will take a different approach to their acclimatization. They’ll spend a couple of days in EBC before heading over to Lobuche, where they’ll make an acclimatization climb. That 6119 meter (20,075 ft) peak is a great place to practice skills and prepare the body, and the team hopes to summit in stages, with some on Thursday and others on Friday of this week. They’ll then return to Everest to start their climb their as well. Team leaders report that the weather in the Khumbu is colder and snowier than usual at the moment.

The Himex team arrived in Base Camp at the end of last week, with David Tait as part of the group once again. Tait is hoping to summit Everest for the fourth time, and is attempting the climb without supplemental oxygen this time out. In their latest Everest Newsletter, the Himex staff profiles Tait and gives a brief interview with the man who once completed a North-South Traverse of the mountain.

Alan Arnette is part of the IMG team and over the weekend he posted an audio dispatch and a very nice, lengthy post about the team’s arrival in BC. If you want to get a true sense of what is like for the climbers and their life on the mountain, then I highly recommend reading Alan’s blog. This is his fourth attempt on Everest, and as I’ve mentioned before, he is climbing as part of his 7 Summits Climbs For Alzheimer’s.

Over the next few days, expect more teams to complete their Puja ceremonies, a prerequisite before the can start up the mountain, and begin their first gear runs to Camp 1. The work begins now with the hope that they can stand on top in about a month to six week.