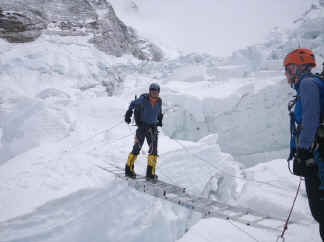 As I mentioned earlier in the week, things are starting to heat up in the Himalaya, particularly on Everest’s South Side. Most of the big teams arrived there last weekend, or early in the week, and having completed their Puja Ceremony, many have started up the mountain.

For most climbers, the first real hurdle on the climb is the Khumbu Icefall, a dangerous part of the journey that happens to be located just outside of Base Camp. The Icefall is a result of the large glacier that is pushing itself down the Khumbu Valley. As it moves, it cracks, separates, and often collapses, making it tough to maneuver through easily. Fortunately, there is a crack team of Sherpas known as the Ice Doctors who build a route through the Icefall each year. The look for safe paths, and use a series of aluminum ladders to create bridges across the open chasms. The climbers then have to walk across those ladders to get to the other side of the glacier, where they can finally start their climb up to Camp 1. It can be quite a harrowing experience, and the path through the Icefall can change a the season goes on.

A number of teams have passed through the Icefall this week and started up the mountain. Dave Hahn, along with his clients Bill and Sara McGahan, have actually already been as high as Camp 2. The trio were one of the first groups to reach BC and have been running ahead of the curve at about ever point so far this year, so I have no doubt they’ll be ready for Camp 3 once the route is opened. Dave posted photos from their trek through the Icefall and up the mountain, as well as a set from around BC, on the Born Out There Blog from First Ascent.

David Tait has gone up to Camp 1 already as well. He does a good job of describing his trek in this post to his blog as well. Tait is climbing with Himex once again this year and is hoping to complete a summit without the use of oxygen this time out. Speaking of Himex, checkout their latest update from the climb by clicking here. Warning, it has a scary picture of the Icefall too!

Meanwhile, the Peak Freaks have been doing some skills building before they cross the Icefall and head up the mountain as well. You’ll find a full report on that, along with some great photos, by clicking here. Tomorrow they’ll head over to Kala Pattar, where they plan to spend the night as their acclimatization process continues. That 18,192 foot peak offers great views of Everest, when the sky is clear, and is an easy trek to help prep for the altitude.

Other teams are off on other peaks in the Khumbu Valley working on their acclimatization as well. Look for most to return to BC by next week and start shuttling the gear up mountain. The process of climbing Everest is a slow, methodical one, that pays off in the end. But before then, there is a lot of work and a lot of down time.